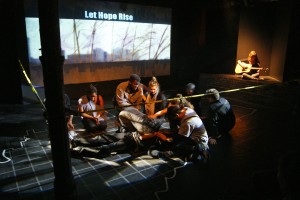 Three plays currently playing in Chicago urgently grab hold of prescient national issues both imperative and sickening: “Teddy Ferrara” at the Goodman Theatre, “columbinus” at American Theater Company and, completing the triptych, the forceful “Crime Scene: A Chicago Anthology,” which opened on Monday night at Collaboraction.

Besides topical relevance, what invisibly binds these brave theatrical expressions is their messages, powerful and ambiguous. Certainly, they all endeavor to create a more hospitable world and harmonious local community, but, more importantly, they understand that the “how” necessitates a proactive conversation; not finger pointing or rigid thesis statements. These shows never tell you exactly what to think, and, in so doing, stimulate lingering vigorous thought.


“Crime Scene,” a work of devised theater that stylistically recreates and, more essentially, humanizes three recent Chicago murders, will doubtlessly provoke mindful discussion; Collaboraction is boldly committed to the cause, having nightly post-show talk-backs not about the show itself, but about how we as Chicagoans can come together to better the worsening situation. Performed by a fluid ensemble of young actors who engage the audience with their versatility and boundless support of one another, “Crime Scene” promotes what we already know but are collectively unwilling to admit: that this well-reported upswing in the city’s violent crime is not a passing trend that will simply fade away if ignored; it is an enabled continuation of Chicago’s murky history that must be stopped.

Early on, in rapid succession, infamous events like the St. Valentine’s Day Massacre, the Chicago Race Riots and the Division Street Riots are reenacted, leading right up to the emergence of hip-hop and the release of Grand Theft Auto IV. Paired with atmospheric projections (video design by Liviu Pasare) typical of Collaboraction’s boisterously creative aesthetic, the jagged timeline is linked with certain depth by the same diverse cast acting out each event. That electric connection is a potent reminder that all of these atrocities happened right here where we live. 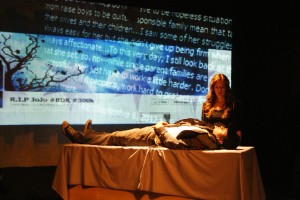 But, while acknowledging the past’s partial responsibility for the present, “Crime Scene” spends the most of its eighty minutes painting an honest portrait of present-day Chicago, affectionate in its ideals and bitterly harsh criticism. A lyric in “Let Hope Rise,” an original peace anthem by Victoria Blade written for the work, for example sings “Between 75th and 79th, they call it Terror Town/Eight people shot down in Terror Town;” Not quite the roundabout joviality of “Peace Train.”

The entire ensemble is exceptionally giving, but Lisandra Tena and Patrese D. McClain stand out as they each betray a moving empathy for these victims and these stories. And their gifts aren’t solely dramatic either. There is a tension-diffusing joy to Tena’s banter with young men at a youth detention center as she relives a daytime outreach performance, and McClain is delightfully two-faced as a news anchorwoman who is not so removed from the stories she reports.

A pastiche of true-life experiences, retrospective interviews, social media excerpts, video and fake news-broadcasts assembles the tragic murders of twelve-year-old Orlando Patterson, teenage rapper Lil JoJo, Stacy Jurich and Natasha McShane. But director and co-conceiver Anthony Moseley avoids delving too deep into each person’s family life and background, making each of these deaths equivocal, united in tragedy. In several cases, the killers’ histories are actually given more focus than the actual victims, but in no way fostering resentment. Father David Kelly, in an interview, posits this Sandra D. Wilson wisdom, “hurt people hurt people,” and shockingly points out that accepted segregation has forged “a whole generation of children who’ve never been to the lakefront.” Pause-giving moments such as those assure that “Crime Scene” has its finger on the pulse of this vital movement. “Wake up.” (Johnny Oleksinski)