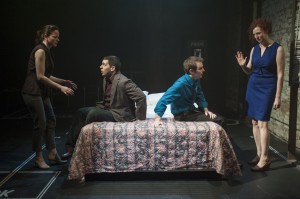 Andrew Bovell revamped “Speaking in Tongues”(1996) and brought it to the screen as the critically praised and popularly well-received “Lantana” (2001). The film corrected much of what the play got wrong. The play got a great deal wrong and Interrobang’s production doesn’t correct it.

Sonja (Meg Elliott) meets Pete (Joe Flynn) in a bar; Jane (Jenny Lamb) meets Leon (Neal Starbird) in a bar. Their liaisons and subsequent conflicts with their spouses are dramatized in unison, a simultaneously recited gimmick that continues for far too long. All four characters connect at some point through protracted monologues about the difficulty of marriage that don’t advance the plot and don’t reveal anything new about marriage. One speech conveys important information: a local therapist is missing and one of the neighbors might be responsible. Way to bury the lead.

Kudos to the ensemble for enduring the language; the piece’s monologues and dialogues are no walk in the park. Bovell’s “tell, don’t show” approach to exposition wears, yet the performances and Jeffry Stanton’s direction keep the text interesting enough to maintain the audience’s attention until the second-act payoff. On the other hand, Stanton’s staging compounds the script’s problems; Mike Mroch’s meta set enhances the piece’s themes but the blocking locations detract; a lovely, hesitant pas de deux between the two couples is hidden in the back of the stage and lost. Other tentative attempts to break up the text with action seem lost in a sea of description. Much is said; less is actually conveyed. (Lisa Buscani)