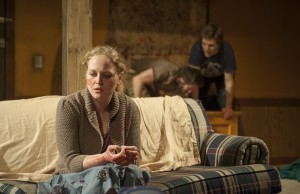 Crystal methamphetamine is the drug of the moment in fiction. On television, the meth-fueled “Breaking Bad” has won critical accolades for its dizzying calamities propelled by Bryan Cranston’s untethered portrayal of chemistry-teacher-turned-dealer Walter White. Onstage, meth is also the complicating mechanism of Pine Box Theater Company’s “25 Saints,” a durably performed though scrawny new play by Joshua Rollins. So, what’s with the fad?

The process of making the drug is complex and dangerous. It involves a multitude of poisonous chemicals and the risk of explosion is present at every unexpected twist and jerk. In that sense, it takes an artisan, a craftsman to properly concoct a decent batch. But mainstream society doesn’t see a meth cooker as an artisan; the law defines him as a criminal, and a low-caste one at that.

The damaging effects of the drug aside, such careful behavior reveals a hidden part of the often pathetic characters who make their living from selling meth. Like the jock who devours James Joyce after football practice, the shut-in cooking meth reveals another identity—a scientific acumen and an undeniable craftsmanship. Watching the gruesome consequences unfurl sure makes you wish the characters had lived up to their potential.

Perhaps, that same ungranted wish applies equally to meth plays, or “25 Saints” anyway. The opening scene of Rollins’ eighty-minute no-brainer, wherein buddies Tuck (Josh Odor) and Charlie (Drew Johnson) carry into their downtrodden home a kicking-and-screaming sheriff’s deputy (John Ross Wilson) and bludgeon him to death with a hammer, is a rambunctious, spine-tingling sequence, with scrappy-freaky fight choreography by Ryan Bourque. After that promising start, though, the writing takes a turn for the vague and contemplative with underanxious speeches and overburdened back story.

There is not much suspense or enigma to be found in this text either. And stories such as these absolutely require at least a sprinkle of suspense to drive them. With explosive chemicals brewing in the corner, rusty tools stacked on a clumsy table and guns stowed in every holster, it is safe to assume that none of these meth-heads—every single character is a meth-head—are getting off scot-free. They daydream of driving off to sunny Virginia Beach, but you know they’re never gonna get there. That conceit can work and has worked. Look at Chekhov’s Moscow-infatuated “The Three Sisters,” as an example. The issue facing “25 Saints,” though, is that the play itself is fully aware that its characters have reached the end of the road.

The quality of the acting, however, coarsely contrasts with the poetical ramblings and predictability of the script, and Susan E. Bowen’s staging is easy and clear. Caroline Neff, as the girlfriend Charlie’s brother left behind when he took off for the Beach, summons striking vulnerability while she’s swept up in an unpalatable, often unbelievable whirlwind—the Appalachian Sheriff (Danny Goldring), his deputy and a hardened woman named Ms. Duffy (Molly Reynolds, quite funny) also have an unlikely hand in the meth trade. All of these actors are alternatively humorous, personable, disturbed, vicious: qualities the script could further emulate. (Johnny Oleksinski)