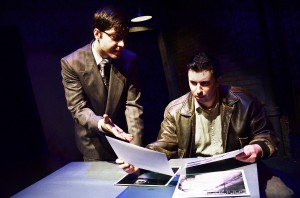 A principal consideration when adapting a novel for the stage is why does this story need to be told in this format? Lifeline Theatre ensemble member Christopher M. Walsh wrote this all-new adaptation of China Miéville’s 2009 award-winning novel, which is currently receiving its world premiere. Lifeline Theatre, now in its thirtieth season, specializes in literary adaptation, but “The City & The City” seems like a departure from their usual work. The script is a weird blend of “CSI” and Dan Brown that comes across as a little unpolished.

The show starts off strong with a highly choreographed and aesthetically pleasing sequence in which all the actors are featured walking in and around one another, suggesting a crowded and fearful city. We surmise  that the setting is a small Eastern European country divided into two indistinct cities: Beszel and Ul Qoma. At rise, an American student is found dead with her face and body badly disfigured. It’s up to inspector Borlú (Steve Schine) and his sidekick Corwi (Marsha Harman) to solve this caper.

While the script initially seems to have some profound ideas about segregation and unification, it quickly digresses into action-movie territory. Characters become clichéd stereotypes with little depth. Essential details concerning the rules of this fantasy setting are given too late in the first act, despite the somewhat unnecessary asides from inspector Borlú. Scenes move too quickly, and in most cases are needlessly complicated.

Through laborious and over-acted scenes, Borlú pieces the details of the student’s murder together. She was an activist who knew too much. A mysterious faction called “Breach” is the underground, but highly feared authority in this dreamy setting. If counted, the word “breach” probably appears in dialogue more than a thousand times. Whether it’s part of a joke or not, the word becomes incredibly grating by the end, considering its definition (within the context of this play) remains unexplained for a majority of the first act.

Lifeline Theatre’s production of “The City & The City” falls flat in nearly all of the scenes. Moments of intensity, such as a scene of strong police brutality, are downplayed while scenes of street chaos are made much too significant, with voice-over narration that’s neither profound nor poetic. The show ends much like a Scooby Doo episode, complete with a mad professor and cheesy one-liners. Christopher M. Walsh’s script unfortunately gives no tangible reason why this story needs to be told in the form of a play; it focuses too much on plot and not enough on structure or character. While the noir stylings of “The City & the City” are compelling in a way, the play is too confusing for its own good. (John J. Accrocco)