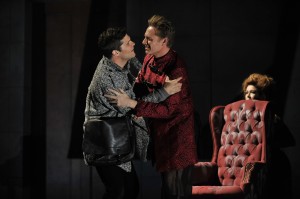 The Andreas Mitisek era has begun at Chicago Opera Theater. Walking across the stage on crutches with a leg cast at Saturday night’s season opening, Mitisek noted that his fall on the ice earlier in the week had given new meaning to the showbiz phrase, “break a leg.”

Unlike the company’s former general director Brian Dickie, who preferred to stay in the background, Mitisek likes to do a stand-up comedy routine as an opera warm-up, last fall reading a mock letter from Mozart, this time around reading a faux Edgar Allan Poe letter from hell where he wondered how Chicagoans could not possibly lend support to such a diverse opera season: “Nevermore.”

As if being comedian and impresario weren’t enough, Mitisek also conducts his own operas at two different companies across the country (he is also general director of the Long Beach Opera in California) which can now share production costs. Next time around he will even direct an opera as well, a one-stop, full-service one-man-opera company for economically strapped times.

The professional Chicago premiere of Philip Glass’ “The Fall of the House of Usher” is certainly a laudable first effort in theory, if not fully in practice. The 1987 ninety-minute intermission-less work is vintage Glass, its music perfectly suited to Poe’s celebrated Gothic tale.

Director Ken Cazan has updated the story, although to exactly when remains an open question. William (baritone Lee Gregory) learns of the summons of his boyhood friend Roderick Usher (tenor Ryan MacPherson) via email and takes a plane and car to visit him in his ancestral home, where silent voyeurs in tight black leather pants, studded belts and Mohawks would suggest, at the very latest, the time that Glass wrote the music. 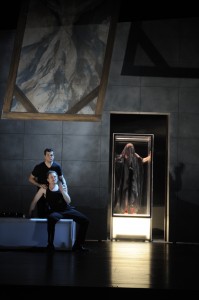 Their relationship is given a heavy dose of repressed homosexuality, at first with mere overtones, but gradually leading to a passionate coming out for both of them. It is also not clear what role Roderick’s dying twin sister Madeline (soprano Suzan Hanson) has in this ménage à trois that becomes quite graphic and often violent by the opera’s climax, again, always with voyeurs around.

There are Expressionistic large shadows on the wall, sometimes in counterpoint across the stage, and the House of Usher is simply a few gray walls that are moved around by the silent voyeurs.

Much of this often seemed to distract from Poe’s narrative and from Glass’ music, which seem well-tailored to each other, even though such full-blown arpeggio-driven diatonic Minimalism has itself become a timepiece.

Musically, MacPherson was the most effective of the principals, with a clarion tenor voice and superb diction. Gregory was the more interesting actor, but tended to swallow his consonants, often to the point of unintelligibility (though there are surtitles), and favored a large vibrato.

Diction was no problem for Hanson, who is called upon to wander the mansion singing abstract vocalise which she certainly did with aplomb. She performed the world premiere of this role twenty-six years ago, although suspicion is the effect Glass was originally after here was more of supernatural ancillary as Poe suggests, rather than completely overshadowing the proceedings in every respect, including dominating all vocal balance by often loudly shrieking as much as singing, with uncontrolled vibrato run amok.

Balance was also a problem in the pit, percussion often smothering the delicate textures to the point of distraction although Mitisek was nonetheless able to evoke emotion out of the score.

A mixed affair, to be sure, but nonetheless a recommended one, if for no other reason the rare opportunity to hear a Glass opera in Chicago: Chicago Opera Theater only presented one previously, “Akhnaten” in 2000, and Lyric has only presented “Satyagraha” back in 1987, the same year Glass wrote this opera. (Dennis Polkow)