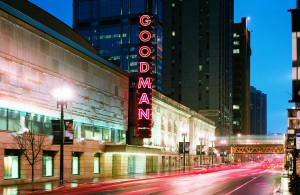 A BLUES-INFUSED NEW WORK AND A REVIVED MUSICAL CLASSIC BOOKEND THE LINE-UP OF WORLD PREMIERES, GOODMAN COMMISSIONS, A BROADWAY HIT PLUS A CHRISTMAS CAROL DIRECTED BY HENRY WISHCAMPER

The Owen Theatre season begins in October with Smokefall by Noah Haidle, a Goodman commission directed by Anne Kauffman in a world-premiere co-production with South Coast Repertory, followed by Tracey Scott Wilson’s Buzzer, directed by Jessica Thebus, and concludes with Ask Aunt Susan, Seth Bockley’s Goodman commission, directed by Henry Wishcamper. Tickets for the 2013/2014 DREAM Season are available now by subscription and to groups only; visit GoodmanTheatre.org or call the box office (312.443.3800; 12noon – 5pm daily). Five-play Albert Theatre subscriptions start at $115; three-play Owen Theatre subscriptions start at $69. Group reservations for 10+ for Pullman Porter Blues and 15+ for Brigadoon may be made by calling 312.443.3820 or emailing [email protected] Individual tickets go on sale beginning in August.

In addition to the eight plays offered on subscription, the Goodman presents its 36th annual production of A Christmas Carol, newly directed this year by Wishcamper. Also, the annual New Stages series will include at least two workshop productions plus three staged readings of plays in development by Latino writers—December 7-22 in the Owen Theatre.

“I am proud to announce this season of extraordinary cultural and aesthetic diversity, of daring firsts, enchanting fables and a major new production of a towering musical,” said Artistic Director Robert Falls.

“We kick off the season toasting Resident Director Chuck Smith’s 20th anniversary at the Goodman: he will direct Pullman Porter Blues, Cheryl L. West’s new Blues-soaked celebration of the triumph of personal pride over societal prejudice, set on the 1937 Pullman Panama Limited run from Chicago to New Orleans. In January, I’m thrilled to again team up with Artistic Associate Rebecca Gilman on Luna Gale, her gripping world-premiere drama that probes the darker side of human relationships as with her previous works Spinning Into Butter and Boy Gets Girl. In March, director Joanie Schultz makes her mainstage debut with David Ives’ sexy, provocative and hilarious hit Venus in Fur, called ‘90 minutes of good, kinky fun’ by The New York Times. In May, Manilow Resident Director Mary Zimmerman directs her ‘strikingly beautiful’ (NPR) newest work, The White Snake, which comes to us following successful runs at Oregon Shakespeare Festival and Berkeley Rep. A moving study of love, adventure and enchantment with a rich musical underscoring, The White Snake is told with Mary’s signature imaginative beauty. The Albert Theatre season culminates with the first major revival of Brigadoon, Lerner and Loewe’s unforgettable musical adventure, in 20 years. We’re thrilled to work for the first time with director/choreographer Rachel Rockwell, a rising star hailed as an artist of ‘astounding and vary rare talents’ by the Chicago Tribune.”

Continued Falls, “Three enormously gifted writers take the stage in the Owen. Starting in October, we welcome back Noah Haidle with his newest play, Smokefall, and welcome Anne Kauffman to direct this fascinating new work about three generations of an eccentric Midwestern family. Tracey Scott Wilson’s new drama Buzzer—a multi-faceted look at race and class in the twenty-first century, directed by Jessica Thebus—takes the stage in February. The three-play Owen season concludes in May with Ask Aunt Susan, Playwright in Residence Seth Bockley’s irreverent new work about online anonymity and authenticity, directed by our newest Artistic Associate Henry Wishcamper.”

About the Plays and Artists in Goodman Theatre’s 2013/2014 Season Visit the Press Room for bios, headshots and imagery.

Titles, artists and dates are subject to change.

IN THE ALBERT THEATRE

With original and classic Blues favorites—including “Sweet Home Chicago”—performed by a live on-stage band, Pullman Porter Blues is a rollicking ride back in time into the luxurious Pullman Trains, where the hidden lives of African American porters emerge to take center stage. It’s June of 1937, and the Panama Limited Pullman Train is speeding from Chicago to New Orleans on the night of the Joe Louis/James Braddock world heavyweight championship. Three generations of Sykes men—African American train porters—wrestle with ghosts of the past and dreams for the future as they eagerly await word of the Brown Bomber’s victory.

For 36 years, A Christmas Carol at Goodman Theatre has been “the crown jewel of the holiday season” (Daily Herald). Based on Charles Dickens’ classic 1843 novella, A Christmas Carol is the unforgettable tale of the miserly Ebenezer Scrooge, a wealthy business man with no family and a disdain for holiday cheer and the poor in Victorian London. One Christmas, Scrooge is visited by four ghosts who take him on an incredible journey that offers a new perspective on everything from his dusty past to his dark future—and gives him an opportunity to sympathize with his fellow man and rediscover life and love.

Caroline, a veteran social worker, thinks she has a typical case on her hands when she meets Peter and Karlie, two teenaged drug addicts accused of neglecting their baby. But when she places their infant daughter in the care of Karlie’s mother, Caroline sparks a family conflict that exposes a shadowy past—and forces her to make a decision with potentially disastrous consequences. Luna Gale is an unflinching examination of the reverberating effects of denial and betrayal.

Written and Directed by Mary Zimmerman, Based on the Classic Chinese Fable Chicago Premiere | May 3 – June 8, 2014

The White Snake chronicles the tale of a gentle serpent spirit who lives for centuries coiled on a mountaintop. One day, she transforms herself into a beautiful young woman and, with her feisty companion, Green Snake, travels down to the world of humans. There, she unexpectedly finds love, happiness and family, and vows to remain a human forever. But when a vengeful monk discovers her true identity, he becomes determined to destroy the life that she’s built—and break apart her marriage to her one true love.

When American tourists Tommy and Jeff get lost on vacation in Scotland they stumble into Brigadoon, a mythical village that appears for only one day every 100 years. No outsider can stay in Brigadoon unless they fall in love, and no resident can ever leave or the village will vanish forever. But when Tommy falls for a village girl, he is forced to choose between returning to the world that he knows—or taking a chance on life and love in the mysterious Brigadoon. Big, beautiful and beguiling, Brigadoon is a “ravishing” (The New Yorker) musical delight.

IN THE OWEN THEATRE

Change is in the air as Violet prepares to bring twin sons into the world. Inside her womb the boys contemplate their future, while her outer world is in transformation: her husband is secretly planning to leave her; her father is slipping into senility; and her daughter has taken a vow of silence. Smokefall follows the lives of this family in an expansive poetic treatise on the fragility of life and the power of love.

New Stages 2013 will feature at least two workshop productions and three staged readings with a strong emphasis on the work of Latino playwrights. Since 2004, New Stages has given Chicago the first look at nearly 60 new plays (including Lynn Nottage’s Pulitzer Prize-winning Ruined). Over the past three decades, Goodman Theatre has produced more than 100 premieres—approximately one third of which are authored by playwrights of color. Director of New Play Development Tanya Palmer oversees the Goodman’s efforts to develop new American plays with contemporary theater artists, including New Stages, the Playwrights Unit (annual residency program) and the theater’s new works commissioning program.

Jackson is a young, successful African American attorney determined to build a life in the rapidly gentrifying neighborhood of his youth. When he returns “home” with his girlfriend and troubled best friend—both white—in tow, the trio are soon forced to confront the simmering racial and sexual tensions that exist both inside and outside their apartment. This dexterous and dark comedy from playwright Tracey Scott Wilson (The Good Negro) fearlessly tackles fear and suspicion in a quickly changing world.

Aunt Susan is a twenty-something man who moonlights as an online advice guru. When “Ask Aunt Susan” becomes the web’s hottest spot for self-help, Aunt Susan’s boss, a reckless funder, rakes in the profits from women’s everyday woes. But as her online reputation mushrooms, so does Aunt Susan’s web of deceit—and soon the phenomenon is much bigger than Aunt Susan could have ever imagined.

Goodman Theatre, “the leading regional theater in the nation’s most important theater city” (Time), is a major cultural, educational and economic pillar in Chicago in its state-of-the-art two-theater complex on North Dearborn Street. Founded in 1925 and currently under the leadership of Artistic Director Robert Falls, “Chicago’s most essential director” (Chicago Tribune), and Executive Director Roche Schulfer, Chicago’s oldest and largest not-for-profit resident theater has welcomed nearly two million patrons to productions and events—including 10 festivals celebrating playwrights such as David Mamet, August Wilson and Horton Foote, as well as the Latino Theatre Festival—and served legions of students through its Education and Community Engagement programs (including the FREE Student Subscription Series and other interactive programs). The Goodman has earned more than 90 awards for hundreds of productions, including the Pulitzer Prize for Ruined by Lynn Nottage—one of 25 new work Goodman commissions in the last decade. American Airlines is the Exclusive Airline of Goodman Theatre. Ruth Ann M. Gillis is Chairman of the Board of Trustees, Sherry John is President of Women’s Board and Lauren Blair is President of the Scenemakers Board, the Goodman’s young professionals auxiliary group.