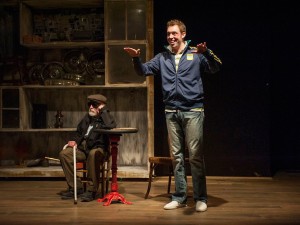 All good drama has one thing in common and that is story. Jonathan Safran Foer’s 2002 novel “Everything is Illuminated” made for a mostly seamless transition to the stage at Next Theatre in Evanston. Adapted by British playwright Simon Block, this version of “Everything is Illuminated” functions independently as its own work because it strongly focuses on story and character. Block’s script makes wise choices in streamlining this untraditionally structured novel and the result is a well-balanced play that includes the important aspects of the novel without overwhelming its audience.

When neurotic American traveler Jonathan (Brad Smith) journeys to the Ukraine in search of the woman who saved his grandfather from the Nazis in WWII, he meets a colorful duo at the railway station who serve as his guides. Witty banter ensues between Jonathan and his guides: Alex (Alex Goodrich), a young Ukrainian obsessed with American pop culture and his aged and blind grandfather (William J. Norris). Goodrich’s endearing performance as Alex serves as the narrator for one of the strands of this tale, a device that brings a surprising amount of heart to the story. A camaraderie forms between Jonathan and Alex, but Alex’s cranky grandfather seems apprehensive to help Jonathan track down a mysterious savior named Augustine. Through well-ordered scenes we learn that it’s not his Ukrainian prejudices but rather his serendipitous connection to the woman in Jonathan’s photo and the town of Trachimbrod.

There are great exchanges on the subject of cultural identity between the three lead characters on their journey; one striking incident in a restaurant indicates just how much what we eat is who we are. Jonathan from New York is a vegetarian, a concept unbelievable to Ukrainians mostly burdened by poverty. In a play so interrelated to the Holocaust and privation, it’s an interesting moment when Jonathan refuses the meat and then the potato, for fear of germs. Grandfather makes a crude, but astute point when he screams, “Myopic Jewish twerp!” This scene, along with others, offers a sort of look at the other side of American tourism into Europe, and the ignorance of conflicting histories.

In another strand of the story, we watch as Jonathan develops the characters of his novel who fight for their existence in short vignettes. While this aspect of the novel would seem like one of the more difficult ones to bring to the stage fluidly, Block’s script makes great use of time and language. The scenes in this play all build to a larger point in both dialogue and stirring monologues. As they get closer to solving the mystery of Jonathan’s heritage, the intensity grows between Jonathan and Alex in heated exchanges. Perhaps the most upsetting monologue comes at the end when the old woman in Jonathan’s photo (Ann Whitney) describes in vivid detail the brutality of the Nazi soldiers.

The play concludes with a poetic monologue from Jonathan that underscores the storytelling nature of this play. Director Devon de Mayo is able to capture the heart of the novel in essential and theatrical ways while her talented cast makes three-dimensional choices that bring them right off the page and into a real life that is sometimes funny and sometimes beautifully sad. (John J. Accrocco)