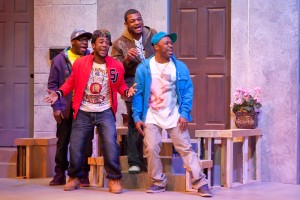 But, when experienced all together, performed by the same group of sixteen unbelievably strong-voiced actors, black and white, tunes as far removed as Lauryn Hill’s “Doo Wop (that thing)” and Frankie Valli’s hit “Can’t Take My Eyes Off Of You” blend harmoniously like they were always meant for the same album. You begin to question why TLC and Lesley Gore are played on separate radio stations. Aren’t they both singing about their misbehaving menfolk?

Director Jackie Taylor and co-writer Rueben Echoles have placed their joyously assembled jukebox in a subdivision called Unison Hills: a pitch-perfect neighborhood where differences in race and culture are acknowledged and celebrated, not fought over. The residents, all of whom work in the music industry, first open their doors at the crack of dawn in a long-forgotten morning ritual, exchanging catchy pleasantries in an original number called “Welcome To Unison Hills.” Unlike most suburbs, twentysomethings all the way up through sixtysomethings happily call this street their home. Here, the kids clock in hours at the recording studio making records while their parents, amidst their own personal quarrels, wish to relive their glory days singing “16 Candles” on a stoop.

Part of what makes “From Doo Wop To Hip Hop” such bracing and fulfilling entertainment is the way it approaches serious issues like gun violence, ageism and race with the palpable joy and optimism characteristic of so many BET shows. However, though they live in racial and cultural harmony, the citizens of Unison Hills aren’t perfect; their problems derive from relationships with spouses, children, boyfriends, girlfriends and neighbors. They bicker, kvetch to a pal at the club, and make up. And, boy, can they sing about it.

Playing an oft-unappreciated wife, Meghan Murphy, with a diva’s unmistakable belt, stops the show in an empowered rendition of “Do Right Woman, Do Right Man” after her husband Odell (David Simmons) refuses to recognize her well-deserved wifely autonomy. A more ticklish guy-girl sparring comes from Tahquesha (Marquecia Jordan is fabulous, sassy and aloof) whose troublesome boyfriend keeps her cell-phone always plastered to her ear. While those relationships are teetering on the edge, John Keating as Frank the Mailman begins an adorable-awkward courtship with Marie (Erin O’Shea). Another one of the neighborhood boys, Brandon Markell Holmes clad in flattering glasses as Darell, has a buttery and versatile voice that rings of John Legend. Of course, every voice here is extraordinary. Even more impressive is listening to their soaring sounds all together. 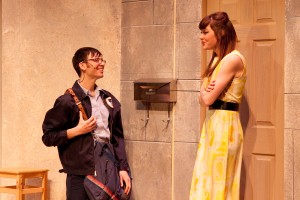 While this idyllic community is open and friendly, the outside’s presence is still felt. When dad Clarence’s (Dwight Neal) visiting brother Cleveland (Christopher B. Straw) is shot in another neighborhood by a stray bullet not meant for him, the wider world comes, all at once, into paralyzing view.

For me, what instantly jumped to mind at that moment was the horrific, unfortunate death of fifteen-year-old Hadiya Pendleton last month, shot so near the safety of her South Side high school only days after she performed at President Obama’s second inauguration. That Washington D.C. event, unbelievably exciting for a young person to attend, was Hadiya’s Unison Hills for a few days: people of all colors, faiths and orientations joining to celebrate social progress and unity.

The story of Hadiya, an innocent and exceptional young person whose life was taken away prematurely, is an urgent reminder that utopias like that of Unison Hills need to become much more than oases in a conflict-ridden world. And Jackie Taylor and the Black Ensemble Theater are valiantly leading the way in that effort. “From Doo Wop To Hip Hop” is a rollicking good time and pleasantly tuneful, but more poignantly gives a hopeful glimpse into the future at a time when we all so sorely need one. (Johnny Oleksinski)