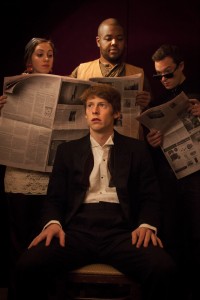 The performance world struggles with fame in all its many mediums. Lady Gaga perceived the glamour of “The Fame” and the gnarling villainy of “The Fame Monster;” TV satire like Ricky Gervais’ “Extras” mocks it with humbling aplomb; films such as “Almost Famous” and “A Star Is Born” examine its attainability or lack thereof; and the cash-strapped stage often begs how, if at all, art and fame can peaceably coexist. Can they?

Playwright John Guare’s “Rich and Famous” doesn’t seem to think so, or perhaps the gleefully hyperactive, super-sized work finds absurdity in the question itself. As is common of Guare, his musical-play “Rich and Famous” delves into a stylized psychological state—that of celebrity—simultaneously mocking the condition and boring into the uppity individuals who make such a big to-do over being wealthy and popular.

For all its mischief though, there is a deep-rooted empathy in Guare’s depiction of Bing Ringling (Andrew Burden Swanson), another struggling playwright whose newest Off Off Broadway show, “The Etruscan Conundrum,” opens to memorably scathing notices. “Rich and Famous” begins as a harmless musical-comedy (the three-person pit is lead by Matt Edmonds), but after those reviews come out the show takes a sharp, surreal twist, providing a litany of surprises and tickles at every turn. When Bing’s former ladyfriend (Baize Buzan, just as believable an ingenue as she is a mother) leaps into a hanging painting, you might even catch a glimpse of Bananas from “The House of Blue Leaves.”

The 1974 play, reminiscent of George S. Kaufman’s Hollywood send-ups of the 1930s and forties (particularly in its extreme caricatures like the composer Anatol Torah, played as a metropolitan hermit by Bernard Balbot with slick comic timing), is an unusual choice for a storefront company like Jackalope Theatre. The show is jazzy and New York-sized, and seems ill-fit for a tiny thrust stage. But this Broadway-bully playing The Den Theatre finds hefty deposits of charm in its skeletal set of scaffolds and signage, Nate Silver’s jolting direction and in the exuberant young cast.

In this wickedly fun little play, Guare tinkers with form and timeline in a manner similar to that of many of his contemporaries. In the late seventies, Christopher Durang was likewise crafting down-on-his-luck fellas with batty buddies and gabby girlfriends. But Guare, for all his oddities, rises above one-act schtick in favor of emotional truth amidst the laughter; it helps when you’ve an actor as kind and everymanly as Swanson. And even for those of us without the twinkle of fame in our eye, Bing’s search for purpose, creativity and parental approval sure hits home. (Johnny Oleksinski)