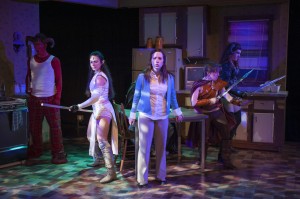 Buzz22 Chicago may be the least-known of the three storefront companies showcased in this year’s Garage Rep, but for sheer creativity, innovation and personality, they win the quest. “She Kills Monsters,” a multifaceted Dungeons & Dragons play by Qui Nguyen, might not be an inaugural production, but it certainly is this very well-put-together, remarkably promising young company’s coming-out party. The show has the most outrageous plot of the three-play series, yet it is far and away the most touching and enthralling. Buzz22 harnesses hope, imagination, humor and surprise, energetically establishing a sparky niche in the Chicago scene.

After stick-in-the-mud Agnes’ (Katherine Banks) entire family dies in a car crash, she seeks out the assistance of a comic-book-store geek and Dungeon Master aka Steve (Richard Traub) to guide her. For, you see, her little sister Tilly (Jessica London-Shields),who because of petty sibling clashing Agnes never really got to know, left behind a composition notebook detailing her personalized Dungeons & Dragons quest—in short, Tilly’s life’s joy and expression. Animated by director Scott Weinstein in the family’s now-empty kitchen, Agnes the Asshatted journeys with Tillius the Paladin and her party of four to the Mountain of Steepness to epically battle an evil, many-headed dragon. Huzzah!

Though there is a sure satirical element to Nguyen’s magical play—the retro setting is 1995, before geek was chic and gay was okay—what struck this particular high-school Star Trek nerd was the heart and reverence for the cherished material at hand. Science Fiction/Fantasy is escapist, adventurous, exhilarating, hilarious, intelligent, but most importantly, forward-thinking. Buzz22 really understands that, and not only in its extremely imaginative design (especially the scenery by William Boles and the sweeping-silly score by Matt Deitchman), which would be considered impressive on just about any stage. Elven princesses, horned-beasts, Amazonians and human beings can grow and change together as they triumph over adversity and come of age into adults. And, as interpreted by Nguyen and Buzz22, this merry band of n’er-do-wells does so while kicking some cheerleader-demon ass. (Johnny Oleksinski) 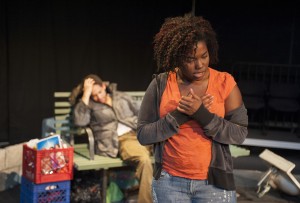 Christina Anderson’s compelling look at community in crisis examines our ability to draw together, just to turn on each other. Her detailed look at racial and economic injustice on small and large scales captures the difficulty of loving our neighbor. Ida (Kristin Ellis) loathes living with her mother in a housing project and contemplates moving in with her ambitious mechanic boyfriend Wynn (Eric Lynch). She develops a relationship with homeless man Klass (Julian Parker), overcoming her fears and getting to know him, only to have that knowledge be their undoing.

The rhythms of Anderson’s short vignette structure occasionally feels truncated, but Cassy Sanders’ direction keeps the action moving. Lizzie Bracken’s spare urban courtyard set suggests the characters’ desolation, and Toni Kendrick’s second-hand prop design illustrates the characters’ focus on the remnants of a happy past as they try to repurpose the world around them for a better future. (Lisa Buscani)

See What I Wanna See/Bailiwick Chicago 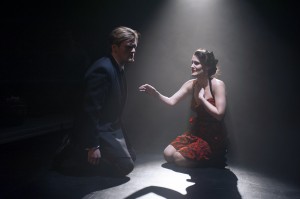 There is no shortage of singing and acting ability in Bailiwick Chicago’s no-frills production of “See What I Wanna See,” Michael John LaChiusa’s disjointed musical rambling, so enamored with its own distancing devices. The five-actor cast, spirited though they may be, fails to enliven this sleepy chamber piece, which muses on faith and truth with little more insight than similar shows that came before it: Sondheim’s “Anyone Can Whistle,” “The Rainmaker” or even Meredith Wilson’s family-friendly flimflam, “The Music Man.” Those comparisons, though, only account for LaChiusa’s second act wherein an informally renounced priest tapes to a tree the time and date of an upcoming miracle in Central Park. In the aftermath of September 11, New Yorkers need something to believe in, and this miracle hoax quickly fulfills that longing. The first act, a murder mystery set in 1951 New York, is an hour-long “Cell Block Tango” without the fun.

Each half is initiated by an adulterous prologue in feudal Japan modeled after Ryunosuke Akutagawa’s short story, “Kesa and Morito,” which in turn inspired the entire musical. A christening of such hefty intellect lends itself better to an essay than a musical, but so it is. The titular characters and extramarital lovers enjoy their last illicit romp before Kesa stabs Morito in the neck, and each prologue details the same event from Kesa and Morito’s respective consciousnesses. In spite of reality, they each see what they wanna see. Not unlike LaChiusa’s far more successful “Hello Again,” this show is a time-hopping series of vignettes on a broad theme, only here the vignettes are fewer, longer and consistently dull. The Garage, a space where vacuous and cozy are separated by an infinitesimally fine line, swallows up the tension and mobility of Lili-Anne Brown’s direction, leaving a fleeting impression of sorrow.

LaChiusa’s score, fit for a cavity filling, is passionately driven and has an admirable unpredictability, but the randomness of the grating music never examines its characters in a state of equilibrium. For a play of and about human crises, primal and existential, the weight and consequence of a turn-of-events cannot be fully grasped unless we are introduced, for a moment, to some semblance of normalcy—an “Iowa Stubborn” to a “Ya Got Trouble!” LaChiusa’s book attempts in vain to do that, but the composer’s score is just too spastic, mimicking conversational speech all the while asserting that everybody is always crazy and self-absorbed. Danni Smith does, however, deliver a pair of honest, exuberant performances in kooky Aunt Monica and a lounge-singin’ wife. (Johnny Oleksinski)