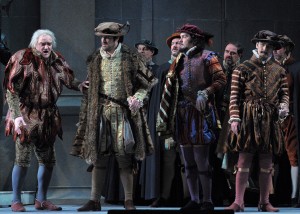 Verdi’s “Rigoletto” is so popular and done so often that it has become a festering ground for avant-garde directorial concepts that more often than not are bizarrely superimposed over Verdi’s intentions. The Met’s current production, for instance, sets the opera in a Las Vegas casino.

This unit-set production, originally presented in 2006 as a traditional “back to basics” enterprise attempting to in part compensate for a 2000 Christopher Alden production that was off the charts, does an effective job of reminding us why “Rigoletto” remains the beloved work that it is. It has been somewhat rethought by director Stephen Barlow, who is making his Lyric Opera debut.

In this incarnation, some non-traditional elements that stretch credibility have crept in, such as the Duke of Mantua (Italian tenor Giuseppe Filianoti) hosting the opening party scene that includes his entire court in his bedroom while he is in his underwear. As if being that exposed were not enough, on opening night, at least, by the time Filianoti’s pants were on and he has his big love duet with Gilda, he brutally cracked a note on his vocal ascent. From that point on, Filianoti became understandably pensive any time the role called for him to go into the upper register.

That preoccupation became significantly distracting as the Duke is supposed to swagger with self-confidence. Instead, the fourth wall became broken as the audience was left wondering each time if Filianoti would reach his high notes or crack again. This is the unfortunate kind of mishap that in Filianoti’s native Italy would lead to loud boos and even throwing of objects and, in the past, even spoiled fruit and vegetables. At Lyric Opera, however, it resulted in most audience members merely sitting on their hands, as it were, making for muted and truncated applause to contrast with the much more demonstrative applause directed at other principals, particularly jarring at the evening’s final curtain call.

By the time of the iconic “La donna è mobile,” Filianoti decided to forgo the traditional high B at the end altogether. That would please Verdi purists as the interpolated note was not in the original score, but nonetheless became standard performance practice early on. Riccardo Muti is notorious for not allowing singers to add these traditional high note endings, as he feels it calls attention to the singer rather than the music. In Filianoti’s case, it was certainly a safe call, but that note has become so embedded in our aural expectation that given the earlier mishap, its elimination seemed more a matter of personal caution rather than respecting Verdi’s original intentions. This was further evidenced by the fact that upon the offstage climactic recap of “La donna è mobile” and with no further notes to have to sing for the evening, Filianoti went for broke and did tentatively touch the note. 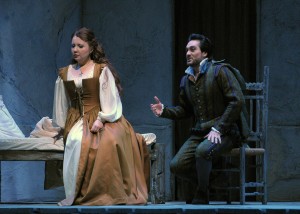 There are two remarkable Lyric debuts in the cast: Polish baritone Andrzej Dobber in the title role and Russian soprano Albina Shagimuratova as Rigoletto’s daughter Gilda. Rigoletto’s hunchback and jester persona are often overplayed both physically and vocally, leaving the most beautiful singing of the opera for the Duke and Gilda. Not this time. Dobber is a tall man and mercifully does not spend the entire opera crouching. Rigoletto is a disabled man both physically and mentally, but we look past that when Dobber sings the role with such immense beauty.

We become so lost in Rigoletto’s worldview that we forget this is a man who not only verbally assaults people unjustly for hire, is so paranoid about hiding a daughter away from the world that he won’t even tell her his own name or let her leave home except for church—where she catches the eye of the Duke—and thinks nothing of hiring a professional assassin to kill the man whom his daughter is in love with. And yet his love for his daughter and Verdi’s music nonetheless make us empathize with him. Not since Sherrill Milnes has there been a Verdi baritone that has sung the role with such a heartfelt combination of tender drama and lyricism. It is a remarkable performance, but Dobber is only singing the role for the first performances. Serbian baritone Željko Lucic, currently performing the role at the Met’s Vegas version, takes over for the latter part of the run, March 14 and after.

For her part, Shagimuratova, while taking a while to warm up on opening night and swooping in a bit pitch-wise at first, brought grace and a true coloratura vocal agility to the role of Gilda. It was fascinating to experience her journey from a girlish naïveté to falling in love to a person willing to sacrifice herself for love, even having been betrayed, and have all of that be heard in her vocalism.

Mezzo-soprano Nicole Piccolomini was also making her Lyric debut as Maddalena, really shining both vocally and dramatically in her saucy scene with the Duke, as well as in her interaction with her brother and assassin Sparafucile, luxuriously sung by Italian bass Andrea Silvestrelli.

Sir Andrew Davis likes to conduct most of the Verdi done at Lyric but having done “Simon Boccanegra” earlier in the season and currently overwhelmed with the massive “Meistersinger,” Evan Rogister was given a go and was making his Lyric debut as well. Rogister will also be conducting next month’s “A Streetcar Named Desire.” Although Davis certainly generates more of the excitement needed for the music in the pit, Rogister did manage to keep things nicely balanced and nuanced throughout the evening.

Doing miraculous work with the male choruses is interim chorus director Ian Robertson, all the more remarkable given that the “Meistersinger” he has prepared has been running concurrently. A pity that artificial thunder was used to smother some of the wonderful vocal storm effects in the opera’s climax: Verdi had it covered far more effectively. (Dennis Polkow)