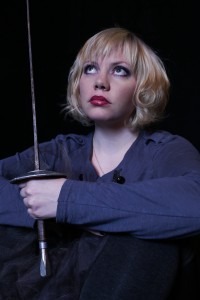 “We’re out on the fringe,” says Jeremy Menekseoglu, artistic director of Dream Theatre Company, sipping a beer in the brightly lit underground area of Sakura Karaoke Lounge in Chinatown. “We’re constantly experimenting and just trying to push this new style. And I sometimes think that we don’t belong further north. We don’t belong in the mix of that. We couldn’t do a show at Theater Wit or 773 or something like that because we couldn’t control the lobby. We couldn’t control everything.” Menekseoglu’s wife Anna, who serves as managing director of Dream Theatre, agrees. “I like that we’re in East Pilsen with the art stuff. It feels like a place where we’ve been accepted for what we are.”

After just over a decade in Chicago, Dream Theatre Company and the prolific Menekseoglu (who, by his own count, has penned forty-something full-length plays) have come to be known for dark, atmospheric shows, staged mostly in the company’s storefront location. Whether it’s a deeply frightening original horror play or an unexpectedly grim adaptation of “Peter Pan” or “Winnie-the-Pooh,” there’s a certain immersive experience that is intrinsically tied to any Dream Theatre show (all of which are original works and almost all penned by Menekseoglu).

Part of Dream Theatre’s mission statement is to “Shatter the barrier between actor and audience.” They’re a company dedicated to immersive theater. Not interactive. “Interactive is something that is forced upon the audience. Immersive is giving something to the audience,” Menekseoglu explains. As he says this, the bright lights suddenly switch off, replaced by muted club lighting and flickering television sets. And then a Chinese couple approaches the karaoke mic and starts belting out a duet. “Kind of like this,” Menekseoglu says with a wry smile. “But seriously, I can’t stand interactive theater. I can’t stand being picked on by a Cirque du Soleil clown. I hate it. I don’t even like when they’re like, ‘Everybody clap.’ I can’t get into it.”

The company’s latest, “The Tragedy of Amleth, Princess of Denmark,” promises to be a bit more traditional, for the most part. “There are a lot of scenes where we give you a lot of distance and other scenes that we bring right to you,” says Menekseoglu. It’s a show he never thought he would write. 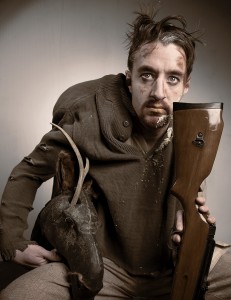 But after seeing his Agon Trilogy—a triptych of female-centered Greek adaptations—a friend kept badgering him to take a stab at Shakespeare’s tragedy. Menekseoglu was against it. Even now he shakes his head at the idea, declaring emphatically, “I kept saying to myself, ‘I would never do that. I would NEVER do that.’ What a horrible thing to do, to take the greatest play of all time and say you have the balls to rewrite it. That’s crazy.”

Until he found a way in.

“What makes this not that, not just trying to rewrite ‘Hamlet,’ is the fact that it’s about this young girl. And I tried to do what I tried to do with my Greek plays: to show a story that makes you think to yourself that the original play also exists but was probably inspired by the true events of this. I’m saying, ‘Here’s the reality, and it would inspire something as beautiful as ‘Hamlet.’’”

Anna, who will be tackling the role of the eponymous princess, feels similarly. “It’s a feminine-centered world that still has misogyny and gender roles and things like that in it.” And as a female Hamlet, she now has a deep understanding of what she deems “Actor’s Hamlet Syndrome.”

“I thought I just made it up as a joke, but there’s actually a thing that when people play Hamlet they go through,” she laughs. “For me to be able to be a girl and… to be able to explore all of those things about Hamlet that are human… that’s what [Menekseoglu] has been able to translate into a brand new play. It’s love. It’s duty. It’s parenting. Where you’re going. What you’re doing. It’s everything.” She pauses for a moment, contemplating. “I never understood why actors wait until they’re in their thirties to play Hamlet, since he’s seventeen… Well, I’m thirty-four and I’m playing ‘girl Hamlet’ and I completely understand now.”

Menekseoglu wants to make it clear that this show is more than just a typical adaptation with a gender swap. “It’s not ‘Hamlet’ and then a girl is playing it!” he says adamantly. “It’s completely rewritten so there’s no way for this universe to exist except if it’s a girl. There’s enough of the ‘Hamlet’ that everyone knows to give people some insight into things, but none of the characters are really who you remember.”

He pauses briefly and then adds with a glimmer in his eye, “It also has haunted houses and theme parks.”

“The Tragedy of Amleth, Princess of Denmark” begins at Dream Theatre, 556 West 18th, March 7 and plays through April 7. For tickets, visit amleth.brownpapertickets.com