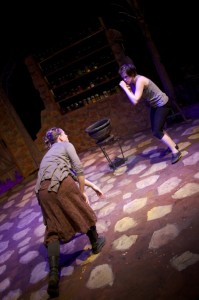 When the first line of a play is “motherfucker,” you know you’re probably in for a good time. “Brewed” is a bizarre female-centric new play by local playwright Scott T Barsotti being presented in collaboration with The Ruckus and Tympanic Theatre Company. Tympanic is a relatively new company who specializes in developing odd and obscure works. Under the direction of Anna C. Bahow, “Brewed” is a lively production full of everything from ultra violence to the supernatural and even some dark family issues.

In “Brewed,” six sisters are mysteriously drawn together for a reunion. At once, there seems to be a strong animosity between them that remains unclear until the ending. From the start it’s fairly apparent this is an alternate reality, done well in that the boundaries of this universe are clearly defined and abided by in strong character development. There’s Juliette (Dana Black) the older one who seems to keep it all together, Collette (Charlotte Mae Ellison), the young ditz, Roxette (Susan Myburgh), who’s brought home a new friend, Nannette (Meredith Rae Lyons) the queen of Nascar, Paulette (Erin Myers) the angry one, and wheelchair-bound Babette (Stevie Chaddock Lambert), around whom the play revolves.

The six sisters must take turns stirring a cauldron for reasons explained throughout the course of the play. The cauldron is kept stirring for emotionally unstable Babette, who we find out is in a wheelchair because of a freak accident that involved all of her sisters. Like any good family saga, the dirty laundry and deep secrets are pulled out in crackling and sardonic dialogue. There’s a lot of humor and it’s obvious that the fantasy elements here are mostly allegorical. The sisters are made into distinct characters by this talented ensemble of women.

Roxette brings an outsider into what appears to be a coven of sorts. Lee (Elise Mayfield) brings lightness into this otherwise hateful situation full of screaming and knockdown fights. Mayfield has an endearing way of delivering her lines that seems to soothe the tension and temper the anger. She also asks the question everyone is dying to know, “So are ya’ll witches or what?” Though it’s never really answered, it’s safe to assume these sisters are dabbling in the supernatural, since they claim if the pot stops stirring their invalid sister will die.

“Brewed” is certainly weird, but that’s not always a bad thing. It’s a refreshing take on the typical family drama and an interesting spin on the fantasy genre. By downplaying the witchy aspects and raising the intensity between characters, Barsotti’s play doesn’t feel as corny as most genre fiction. If anything, the play feels somewhat over-workshopped but the tradeoff is how comfortable these seven actresses appear with the material and each other. (John J. Accrocco)

Thoughtful review, but you should not “spoil” important revelations in the script, especially not without a warning or “Alert.” It’s a premiere production of a new script (if that matters), just so you know.