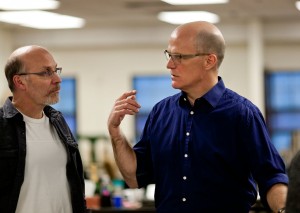 White planks. What I’m staring at with the mischievous grin of a shifty-eyed child is a field of neatly lined-up boards with both a silver shimmer and the scratched-at exterior of birch bark—a little bit Chekhov’s Tuzenbach, a little bit “Crouching Tiger, Hidden Dragon.” From the tall ceiling, metal chains stream down to a serene swing, also starkly white. There are two levels and no other furniture. During performances, no more than three props are ever onstage. Colored lights will create location.

“I hope it doesn’t come to bite us in the butt later on,” says Court Theatre artistic director Charles Newell, eating a quick dinner while enthusiastically chatting with me. I like it—both the impromptu meal and the reinvigorating perspective on a familiar play. Newell clearly understands the risks associated with what he’s doing. He’s staging David Auburn’s Pulitzer Prize-winning “Proof” in Hyde Park, the actual location it’s set in, without any realistic elements of the neighborhood. Hell, of any neighborhood.

But Newell isn’t aiming to make waves. “I never saw a stage production of it, and have not seen the movie, so I have no context other than some photos.” But from what he gathers, “Proof” is typically “set on a back porch in Hyde Park with a very literal, naturalistic, realistic feel to it. And I know a lot of those backyard porches because I’ve sat on them.”

What made Newell reconsider “Proof”? The setting, for one, but also its newly acquired emotional impact. “About two and a half years ago, I reread the play. And it was a transformative experience. When I was reading it, the play was just sort of lit on fire.”

So, “Proof” ain’t fireproof? “I had this incredible personal response to it, which was much more about this woman’s journey to figure out who the hell she was!” Upon rereading the play, so different from the person he was in 2000, Newell saw main-character Catherine as a girl seeking an identity separate from her famous father and a uniquely talented individual without faith in her obvious abilities. 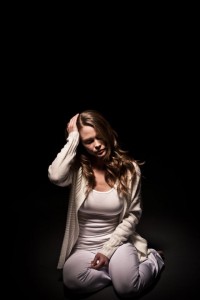 “Those were two major events that happened to me relatively recently. My mother’s passing away was finally when I was able to define myself separate from her.” Newell adds a surprising footnote, “And the silly thing to say is that ‘Porgy and Bess’ (the director’s hugely acclaimed 2011 staging of the American opera) is my proof.” He goes on, “For the first time, honestly, I really felt like maybe that there was something unique and specific about my talent that I never quite embraced and never quite even believed.” Says Newell, “I always thought of myself as, you know, a pretty average guy.”

And, frankly, I have always thought of “Proof” as a pretty average play, albeit with an intriguing subject and an easy-to-follow narrative. But, what Newell has found, with the help of his passionate personal connection, is that “Proof” has bonafide legs. Court specializes in classical theater and the modern classic, which is exactly what Newell insists that “Proof” has become.

“When you dig into a play and it keeps feeling like you’re running into dead ends, and it keeps being too limited and saying ‘No, you can’t go there,’ that to me is an indication that after some period of time, people are gonna stop doing that play. But that’s not been the experience at all with this one,” he continues, “It just keeps giving.”

It has certainly given way to this production’s relatively radical new design. “I started off the design process in which I said, ‘Hey guys, given all of this, let’s just start with one thing we know. Let’s say we know it isn’t: it’s not set on a literal porch in a backyard in Hyde Park.’ And for a long time, we played around with a much more abstract space, a metaphoric space, a kind of psychological space.” He qualifies this by saying, “We need the space to be both. We need it to be a porch, but also be an environment in which this more psychological, metaphoric stuff can happen.” In its performances and visuals, this production, more than many, will closely follow Catherine’s psychological journey. In fact, she never leaves the stage.

Auburn, who Newell says may have a bolstered relationship with Court in coming seasons, made a big impression on him. “He’s a man of few words, but so precise. He’s also one of the smartest people I’ve met in a long time.” When the playwright made a trip to Chicago, Newell was nervous over how he would respond to the unusual changes. Surprisingly “he said he was grateful for our design. I said, ‘What do you mean?’” Auburn then imparted a wisdom very much in tune with Court’s aesthetic and mission. “Well, you’re not thinking of a design that is a literal porch in Hyde Park. You don’t need to. You’re in the neighborhood.”