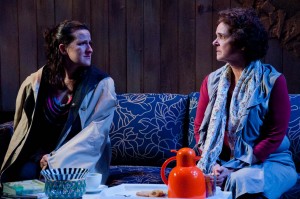 Prolific Norwegian playwright Jon Fosse’s body of work, while performed with great frequency in Europe, is rarely seen on American stages. I wouldn’t interpret that as qualitative commentary on the plays themselves, but a cross-cultural hesitance that Akvavit Theatre was formed in order to amend. Watching three Fosse pieces performed in English by Akvavit illuminates both the writer’s style—heightened subtextual landscapes with deep-running emotionality, obscure and repetitive speech atop abstract timelines—and the extreme difficulty of performing it here in the States, for both artist and audience.

It is challenging to discern whether the communicative roadblocks lie with Fosse, Kyle Korynta’s rigidly formal translations, the creative team, we the audience or a combination of the aforementioned, but this seasonal trio—”A Summer’s Day,” “Autumn Dream” and plain old “Winter”—is awfully frustrating in its chilly disconnect, no matter the titular season. Fosse’s mechanics, including verbal repetitions and life cycles, are not fully embodied by this presentation, given the title “Gjenganger,” which requires the audience to exhaustively work in order to maintain investment. And the performances wade around the fjord, not pensively, but indecisively.

The most affecting image here is water, as it so often is, in the strongest of the three plays, “A Summer’s Day,” directed by Wm. Bullion. A relationship, unhappy in its boredom and silence, ends when a husband (Joshua Harris) is killed during a leisurely rowboat trip on the choppy fjord. But on that stormy day, the question remains: just how leisurely was the excursion, really? Before the abandoned boat is discovered, his wife (Marika Mashburn) finds all of his clothes neatly folded, a peculiar sight that leaves her uneasy. The unspoken implication is that the man has committed suicide, and his wife wordlessly stares out at the water and breathes in her new, unwanted existence.

The power of this play does not come from the husband’s rationale as you might find in Strindberg or Chekhov’s similarly themed plays, or Kate Chopin on the literary tide, but from his wife’s sadness both present and future. She doesn’t mourn or wail; the depression seeps. Being the most watchable does not, however, excuse “A Summer’s Day” of its flaws. The verbal motif of the word “unease,” probably intended by Fosse to make us uneasy ourselves through a kind of poetic hypnosis, has a hackneyed, word-of-the-day quality. And the lengthy pauses, as are found in the entire trilogy, are not adequately filled by the actors to keep attention spans (or legs, as on opening night) from wandering.

“Autumn Dream,” the least literal of all the plays, wickedly enough, has the most descriptive title. The skewed history of a man and woman’s (Beau Forbes and Kirstin Franklin) rekindled relationship has a definite dreamlike quality. Romances that begin in graveyards can only be in dreams, right? The happenstance encounters with parents and ex-wife, deaths and divorces, are both random and justified, giving that familiar sleep-time effect. Once again though, this play slogs along, and much more so than “A Summer’s Day.” Though there is a definite journey or at least an experience to be had, the tone is a constant modern sheen, underscored by loud and unnecessary fog.

“Winter,” the final play on the opening night Sunday series, brings about the same feelings Chicagoans have toward overlong calendar-defiant winters—irritation and impatience. The dialogue here is the most outright strange, which is okay, but it also is not grounded in the actors. It floats above them, inconsequential and easily ignored. This third play about a couple (Corey Noble and Bergen Anderson) looks to interpret a flighty one-night stand. Given Fosse’s penchant for unrealistic depictions and odd characters, it was difficult to discern if the maniacal woman in the mix was, indeed, crazy or if her dialogue was written so as to expose a rawer truth—a consistent thread throughout the disparate “Gjenganger.” (Johnny Oleksinski)