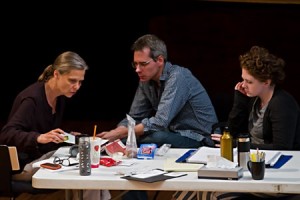 The diverse season begins on September 12 (through November 10) with the American premiere of “The Wheel” by playwright Zinnie Harris in the Downstairs Theatre. The play, which takes place in nineteenth century Spain, premiered at the Edinburgh Fringe Festival in 2011. At Steppenwolf, ensemble member Tina Landau will direct, and ensemble members Joan Allen (her first appearance in over two decades, not unlike “The Birthday Party” cast member Moira Harris, absent from Steppenwolf for fifteen years), Tim Hopper, Ora Jones and Yasen Peyankov will star.

Steppenwolf has also snagged the Chicago premiere of Nina Raine’s potent and powerful “Tribes,” which will run from December 5 to February 9 Downstairs. A domestic drama about a deaf adult in a progressive English family, “Tribes” had strong Chicago ties in its American premiere at Barrow Street Theatre in New York. Then, Steppenwolf founder and ensemble member Jeff Perry starred and David Cromer directed. At Steppenwolf, ensemble member Austin Pendleton will direct a new production featuring Alana Arenas and Francis Guinan.

Starting in February in the Upstairs Theatre is the Chicago Premiere of “Russian Transport” by Erika Sheffer. The Brooklyn-set play about a Russian family will be directed by ensemble member Yasen Peyankov and will feature ensemble members Tim Hopper, Mariann Mayberry and Alan Wilder. It plays February 6 through May 11.

Next, from April 3 to June 8, is the world premiere family play, “The Way West” by Mona Mansour, which takes place during harsh economic times in California. Ensemble member Amy Morton, returning triumphant from the seismic Broadway run of “Who’s Afraid of Virginia Woolf?” will direct.

Ending the season is a sexually-charged world premiere by Bruce Norris whose “Clybourne Park” won the Tony and Olivier Awards and the Pulitzer Prize. “The Qualms,” directed by Pam McKinnon, is a member of the supposed-to-be-fun evening gone awry genre. A group of friends gather together in a beachside home only to find the proceedings complicate. “The Qualms” will play the Downstairs Theatre from July 3 to August 31.