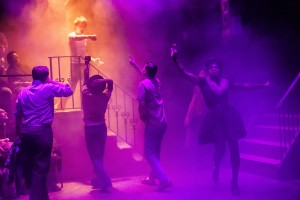 Just over a year has passed since “Hit The Wall” began an acclaimed and popular world premiere in the Steppenwolf Garage Rep. On opening night last February, after a seven-hour-long marathon of shows, the Stonewall Riots-set play jolted a fatigued and overloaded audience with its immersive, momentous, youthful tribute to the movers and shapers of the past and its heartfelt reflection of the struggles still being fought today.

The quality that transitions most affectingly from The Inconvenience’s production in Chicago to the play’s new Off-Broadway incarnation, which opened tonight at the Barrow Street Theatre, is the boundless energy.

Playwright Ike Holter’s poetic crescendos alongside director Eric Hoff’s chaotic staging lend a revolutionary riotousness to “Hit The Wall”‘s righteousness. Garbage cans are hurled, protests are chanted, punches are thrown, and all are punctuated by explosions of liberating dance and frenetic celebration. While too many new plays proficiently engage in soft-focused whimsy, “Hit The Wall”’s powerful voice feels singular and unrestrained: the mustang in a herd of Lipizzaners.

June 27, 1969 is an important night for this play’s diverse band of underdogs, even apart from the historical watershed it would, of course, become. During an unbearably hot summer, a disparate group descends on the Stonewall Inn, a bar where just about anyone can dance without fear of a sideways glance. Black lesbian activist Roberta (Carolyn Michelle Smith) shows up to meet a new love interest, Peg; the innocently named Newbie (Nick Bailey) comes to escape a conservative suburb; drag queen Carson and starry eyed admirer Cliff (Ben Diskant) to honor idol Judy Garland in the wake of the “Wizard of Oz” actress’ death; bitchy commenters Tano (Arturo Soria, returning from Chicago) and Mika (Gregory Haney) to ogle A-Gay (Sean Allan Krill). They’ve all come for a party, but they get way more than they bargained for.

Few plays recognize the early moments of the fledgling gay rights movement before logic and collectivism entered the picture; a time when a few dissociated people aggressively fell to a primal need for acknowledgment, so surrounded by ignorance and hate. Rarer still is to have the gall to grab an event as sensitive and major as Stonewall and give it a fictitious, scrappy representation relatively free of self-seriousness and fact; an especially frightening prospect given Barrow Street Theatre’s proximity to the actual Stonewall Inn, about two blocks away. 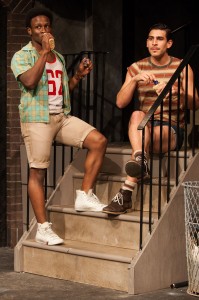 Holter executes both with mercurial style, flair and sentiment, though never treating Stonewall as hallowed ground. He embraces the powder-keg spirit of revolution, juxtaposing the Riots to the other great movements of the 1960s: Women’s Liberation, civil rights, the sexual revolution. Coming of age together, gay rights had a unique roadblock: anonymity. Other revolutions, united by race and gender, didn’t need to out themselves. But, in this fight, that was the all-important first step. And the hurdles came from more than just a conservative populace.

Wisely dramatized here, and perhaps infuriating for some onlookers, is harmful gay in-fighting, pitting transgender against gay against lesbian. While the insults are the characters’ individual defense mechanisms during the day, they recede as the group comes together in a nighttime cloud of club haze. When the cops (Matthew Greer) storm Stonewall, in a gloriously lit sequence by designer Keith Parham, and the ensemble defiantly howls as one, “No more watching! No more watching!”, it strikes a moving chord on multiple levels.

Although Holter’s text has improved since Chicago, clarifying the shared narration and maintaining an insatiable momentum, what has been lost by this production is the full brunt of the play’s emotional impact. The playwright has crafted a fine tonal shift from frivolous personal sass to collective empowerment, but several leading players are wound up in an ongoing state of fancy. In Chicago, the core story very much belonged to Carson, then interpreted by Manny Buckley. The role is played at Barrow Street by Nathan Lee Graham without much vulnerability or variance in the character’s impeccably giving arc.

Graham’s rapid delivery lands more comedically than triumphantly, and the most painful steps on Carson’s journey lack any discernible honesty or grit. The play has instead become more about Peg, a transgender man, once again being given a roaring portrayal by Rania Salem Manganaro, and Newbie, with Bailey sweetly embodying both the puerile youth of the sixties and the “It Gets Better” generation of today.

A typically subsidiary ingredient is fight choreography, but, in a play that revolves around a riot, it is an essential storyteller. Unfortunately, J. David Brimmer has staged an approximation of violence, dulling the riot’s necessary sting and eventual influence. The actors don’t experience the full force of the attacks, and maneuvers that might appear passable in a proscenium configuration look rather wimpy in the round. Having the audience enveloping the action on all sides diffuses tension; it scrunches the playing space and limits Hoff’s staging possibilities.

The actors nonetheless inhabit the Christopher Park stage (set by Lauren Helpern) with comfort and casual joviality. Kicked out of their homes by parents and leading strenuous double lives, for these vibrant characters, Stonewall, an innocuous stoop and Christopher Park become adoptive homes. And, as Ms. Garland thrice and rightly said, “There’s no place like home.”