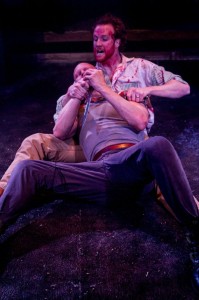 “I was born for a storm and a calm does not suit me,” said war-hero-turned-president Andrew Jackson, a man whose personal and political lives were both defined by tumult. His ferocious worldview would surely be echoed by the vicious though resoundingly human title character of William Shakespeare’s “Coriolanus,” which is receiving an ideal production by The Hypocrites at the Chopin Theatre.

Entering a space covered in soft, gray carpet imparts an illusion of ease. Maybe the bounce of your foot against the plush floor will mimic the play’s own delighted buoyancy of language and plot. Not so in this basement battlefield.

I imagine scenic designer William Boles has included the cushioned flooring to muffle the actors’ blunt bodily impacts against the unforgiving cement ground, as this is an intensely violent staging of “Coriolanus”: already an intensely violent play about a Roman general-turned-consul. There’s something unnervingly primal about the absence of special effects in Ryan Bourque’s fights. His full-contact slaps and knees to the stomach make those bystanders seated in the front row lean back, for fear they might be unwillingly dragged across that carpet by some blood-thirsty rogue.

Yes, the panoply of war is excitedly and engagingly staged, but only as forcibly as Shakespeare’s language is delivered in Geoff Button’s production of this infrequently performed play. Truthfully, as directed by Button, “Coriolanus” is a far more resonant leader’s-fall-from-grace play than Chicago Shakespeare Theater’s concurrently running “Julius Caesar” is, and “Coriolanus” unquestionably presents the more imposing challenge of the two.

Marcus Brutus has the benefit of time, text and context (Who, Latin student or “Real Housewives” fanatic, doesn’t know “Et tu, Brute?”?) to relate himself to us, but Caius Martius Coriolanus is granted hardly any rest or reflection by Shakespeare; he’s whisked around from event to event, well, like a modern-day president. Perhaps in today’s political landscape, so volatile in its turnovers, Coriolanus has become the more recognizable figure. 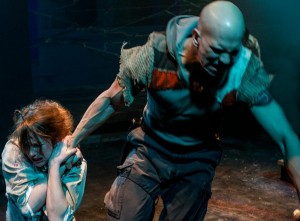 Button has trimmed the play to an hour and forty-five minutes allowing for no intermission as the tragedy would’ve been originally ingested. The abbreviation comes not, however, at the cost of clarity or character development; the play advances aggressively with nary a breath taken between scenes, but every citizen, tribune (Ryan Bollettino and Greg Hardigan), friend and enemy are all distinct and memorable presences.

Particularly cunning is the reduction of the plebian crowds to a wisecracking three actors (Bourque, Luke Couzens and Chris Chmelik). Absentmindedly snacking on boiled corn, corn dogs and popcorn (a nod to their enraged chant, “Let us kill him, and we’ll have corn at our own price”) as they determine the fickle will of the people, the trio acts as a comedic counter to Steve O’Connell’s agonized Coriolanus, brutishly performed without a politic or artful drop of blood in his body. Through his honest frustration, swift vengeance and childish gullibility, O’Connell unwittingly transforms into a history book’s everypolitician.

All of the performances are allowed to shine brighter than any scene-stealing conceptual artifice, for there really isn’t one to speak of. Jeremy Floyd’s  costumes, while denoting class—the tribunes look like comic Irish mayors and the citizens are brown vest-clad ragamuffins—have no obvious marks of time or place. Boles’ branch-strewn set fills the theater with raised wooden walkways placed behind all four sections of seating and Jared Moore’s lighting perfectly builds opulent and grizzly locations while always evoking titillating suspense and dread.

During one tense encounter, the banished Coriolanus arrives at the dwelling of former wartime foe the Volscian Aufidius (Jude Roche), hooded and with his bearded face shadowed. Only his obfuscated silhouette is visible while Aufidius, imbued with Roche’s confident conversational terror, begs of Coriolanus his identity. The scene is a sumptuous dance of light, scenery and subtle performance that disconcertingly reminds us that quiet, unforced speech is an endangered species for so many indecently bravado Shakespearean productions. (Johnny Oleksinski)

At The Chopin Theatre, 1543 West Division, the-hypocrites.com. Through April 23.