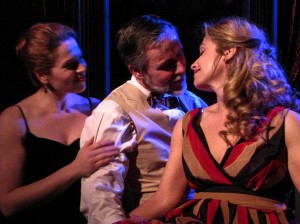 The early works of Andrew Lloyd Webber incorporated rock and pop idioms into the Broadway musical that, taken with the punchy lyrics of his early partner Tim Rice and a through-composed virtually operatic style, brought new life into the genre that would be widely emulated. And yet, an irony demonstrated with a show such as 1989’s “Aspects of Love” is that Lloyd Webber, a gifted if derivative melodist, might well have been more at home composing more traditional musicals all along.

“Aspects of Love” is based on David Garnett’s novel of the same name and manages to combine the singing pedophilia of Lerner & Loewe’s “Gigi” with the swagger and romance of Sondheim’s “A Little Night Music” but with Lloyd Webber’s own brand of schmaltzy sung melodrama. How ironic then that one of the leads is a painter who forges originals as Lloyd Webber is not only “borrowing” heavily from his own earlier and usually better music in “Aspects,” but from heavy doses of Puccini as well.

The end result is a collage work where the music and the drama rarely seem to be on equal terms. The needlessly complicated and chatty libretto by Don Black and Charles Hart attempts to preserve far too much of the novel and is done by and large in recitative style. The adaptation is too literal, both Black and Hart forgetting that much more can be said without words when there is effective music to communicate it.

The main tune and best-known song of the piece is the simple, effective three-chord piano-accompanied anthem “Love Changes Everything” that is used as a leitmotiv associated with “love” in various guises across a variety of May-December romances throughout the show. And yet the music does little to delineate the various characters of the drama nor what they are feeling, particularly when it comes to love. In fact, no one really seems to ever be in love in this show, which has always been a huge part of the problem. Who is with whom now? Do they really feel something for each other? Do we really care? 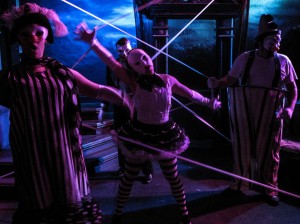 Well, director Fred Anzevino cares, and by making a persuasive case for “Aspects” in the first local staging of the work since the national tour of its original run more than twenty years ago, he manages to rescue a work that I confess seemed in its earliest incarnation to be utterly irredeemable. Anzevino feels this work is a lost gem and does everything he can to polish it up and show it at its best. The results are impressive, and perfect for the intimate space of the No Exit Café.

Music director and pianist Jeremy Ramey is complemented with a single violin, flute and clarinet and the cast is up to the formidable task of singing their hearts out for two-and-a-half hours.

Alex is played by Matthew Keffer, who has to make the broadest journey across the show, going from a seventeen-year-old to a middle-aged man, yet looking and acting remarkably the same. He has a pleasing tenor voice although tends to oversing and strain as he goes higher, quite unnecessary in such a small space.

Kelli Harrington plays Rose, Alex’s initial love interest, and has a bright soprano voice that suits the role and is also an effective actress. Their Act I love scenes and duet together are a highlight of the show.

Sean Thomas brings gravitas to the role of Alex’s uncle George and Colette Todd offers the most nuanced performance of the show as Giulietta. Fresh vocal talent Rochelle Therrien plays an advanced and mature fifteen-year-old Jenny.

A lot of care has gone into this staging, including some phenomenal ensemble dance turns choreographed by James Beaudry, and the end result is quite entertaining and well worth the trip to Rogers Park. (Dennis Polkow)