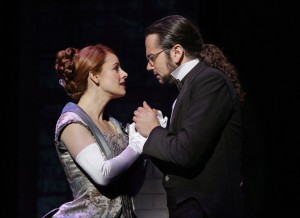 Recall, if you will, the factors that distinguish Clark Kent from his alter-ego Superman. Yes, Clark gruffly rips open his button-down to reveal that iconic spandex “S,” but that’s not what gets the identity ball rolling. Personally, I relish the moment Christopher Reeve’s’ Kent removes his spectacles, sometimes with slow hesitation, other times in dramatic haste, to the awestruck gasps of crowds who’d labored under the misapprehension that he was a busybody Rick Moranis with strangely developed pectorals. It’s cheesy, but there is a power in that simple apotheosis from zero to hero, especially for me, an actually sight-challenged glasses wearer.

Constantine Maroulis’ transition (if it can truly be called a transition) from the meek Dr. Jekyll into the supposed-to-be monstrous and murderous Mr. Hyde in the laughably terrible pre-Broadway tour of “Jekyll & Hyde” is silly too, but uncomfortably so. The good doctor adorns a sensible pony tail, and after being hooked up unspecifically to nuclear green tubules, whips back his shiny hair with the practiced gusto of a “Rock of Ages” veteran. And voila! Mr. Hyde, I think.

A savage hairdo was the major physical change for Robert Cuccioli’s Jekyll/Hyde on Broadway in the nineties too, but by all accounts the actor also incorporated some other substantive character traits to properly separate the man from his doppelgänger. Maroulis, with his familiar pop singing voice and a manufactured British dialect that marries Sean Connery and Mikhail Baryshnikov, is over-reliant on those luscious locks. Here, Hyde is indistinguishable from Dr. Jekyll in physicality, mannerism and song style. So, when Jekyll’s domestic fiancée Emma (Teal Wicks) asks of Mr. Hyde his name near the play’s end, even in a musical the audience cannot suspend their disbelief to such high heights. Truly, this Broadway-bound “Jekyll & Hyde” gives you neither Jekyll nor Hyde—only Constantine.

Not that the “American Idol” favorite and somehow former Tony nominee is the lowliest part of this awful production, a soulless exercise in pop nostalgia and star casting in an already artless, blaring musical. Trapped in the undue excesses of the 1980s along with the rest of Wildhorn’s canon, “Jekyll & Hyde” subsists on cheap musical theatrics—extremely generic, synthetic and inoffensive ditties like “This Is The Moment” and “Someone Like You” elicit eye rolls at every compulsory key change and horoscope-relatable lyric—and the unkept promise of lavishness. All of director Jeff Calhoun’s inflatedly sexual but not-at-all-sexy production looks cheap and feels cheaper. 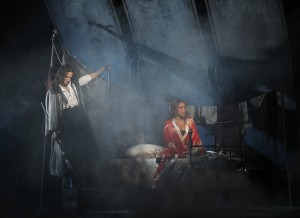 That is, if your eyes are even open. Wildhorn and book writer Leslie Bricusse’s treatment of the plot, well known by Gothic novel lovers and casual horror flick fans alike, offers nary a surprise or insight. And unlike those shows we all flock to again and again with the hope of discovering something new, Bricusse’s flaccid book and Wildhorn’s score have absolutely nothing more to say. And did they ever, really?

Fortunately, the second act offers some soothing respite in the form of camp, as well as the musical’s one good song, “In His Eyes,” sympathetically sung by Canadian songstress Deborah Cox’s Lucy and Wicks’ Emma. Outside of that all-too-short oasis of legitimate drama, inappropriately timed yawns are replaced by inappropriately timed laughs. Most absurdly, during the “Confrontation,” a song that usually sees an actor energetically leap from Jekyll to Hyde, Maroulis croons to a slaphappy projection of himself over a fireplace mantle. Crowded with blinking eyes, absurd video of flames and animated laughing Constantine heads, it’s a far less satisfying culmination than when a single actor wrestles with his own tortured mind and body. And worse, it’s weird observing a relatively famous performer narcissistically stare at singing replicas of his own head.

The scenic design by Tobin Ost, most recently represented on Broadway by the similarly loud-and-proud “Newsies,” has here, like in the Disney show, built a set that interplays projections and physical structures to implicate broader scenery. Several off-kilter screens wade around the stage, manipulated by the ensemble, with images of sitting rooms or recently murdered well-to-do hospital board members dimly projected upon them. The aesthetic is that of the ill-fated German import “Dance of The Vampires” or Elton John’s “Lestat.” Combined with Jeff Croiter’s neon purple lights, “Jekyll & Hyde” could easily be mistaken for the longest Eurovision performance in history—a quality that, much to my chagrin, will appeal to some people. (Johnny Oleksinski)