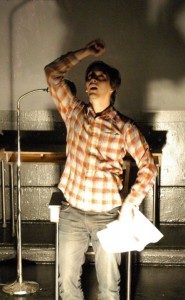 The best way to come at “Analog” at the Neo-Futurists is just by going with it. Rooted in its own eccentricities, company member Kurt Chiang’s play is a first-person account of his cancer survival. Chiang’s play tells this story in a unique way that tows the line between experimental theater and performance art, all the while remaining accessible. At its simplest level “Analog” is about a man who’s working to transcribe “Lord of the Flies,” and through highly poetic and literary monologues we find out why.

After an unexplained religious rite, Chiang appears and candidly welcomes the audience. His opening seems like the ramblings of a diary; lines about how he prefers buying the tangible forms of music and how he doesn’t make things happen, things just happen to him. The play progresses through a series of abstract monologues in which themes of existentialism, death and fate all interrelate and no line seems arbitrary.

The house lights stay on more often than they’re off and at first it’s unnerving but becomes comforting when the play moves from darker to lighter notes. “Analog” is certainly a play that asks a lot of its audience intellectually, but it gives back in highly emotional and complete thoughts. Though the story is told in a non-traditional format, the stream-of-conscious style of abstracted monologues all support its central idea. It’s as though Chiang has decided to take his journal and make it a theatrical piece of art, dramatically representing the way we think and create. The theater lobby itself is an exhibit of his creative process and serves to prepare viewers for the experience they are about to have.

There are so many elements at work in “Analog” and strong performances are certainly one of them. Jessica Anne, Lizi Breit, Trevor Dawkins and Hank Vogler represent the various characters in Chiang’s story and do so through thick and powerful monologues. Perhaps the most exciting monologue in the play is given by Jessica Anne as Chiang’s wife. She pleads with him to finish the project he’s working on because even if he’s technically cured today there’s still a chance the cancer could come back and he will eventually die. Jessica Anne’s gripping delivery provides a necessary sense of conflict in a play so focused on its narrator.

Would “Analog” work with another company in another time and place? Likely it would not. There’s so much passion and personal attachment here and it resonates in the unforgettable experience of this piece. (John J. Accrocco)