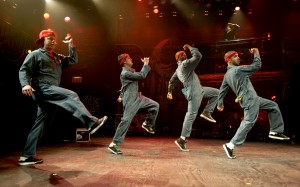 Wedging a rap into William Shakespeare’s plays is well-tread territory. Every so often, a hoodied Hamlet will hyperactively soliloquize the usual six speeches verbatim with a basic beat that safely scratches at the idea of hip-hop; such productions’ raison d’etre is to showcase that Shakespeare’s twisted tongue isn’t so far removed from modern rap, and transitorily neither are you and hoodied Hamlet. However, while the audience and Hamlet may be, forever, a little more than kin, Shakespearean verse and rap are separated by about four hundred years of cultural upheaval. Anybody with an FM radio and a bookshelf knows that iambic pentameter and a prerecorded bass drum do not a rap make.

But the newest, liveliest music can absolutely activate theatrical storytelling if the actors own the words they express and style they emanate. Those factors are impressively evident in the Q Brothers’ thrilling “Othello: The Remix,” which opened on Saturday night at Chicago Shakespeare Theater. The preposterously talented writing and performing team (alongside Jackson Doran and Postell Pringle) have updated and completely rewritten “Othello” in hip-hop, rap and R&B. And most admirably, these characters’—rappers, girlfriends, geeks, producers, entourages—music is completely true to genre; It’s not a compromised, cutesy approximation of hip-hop to appease happy-go-lucky pier-patrons. The Q Brothers got guts.

That the Bard mined other dramatists’ plays for his own works is well-known and irrefutable. In that respect, I find “Othello: The Remix” to be among the more honorably intended Shakespearean plays I’ve seen. What better way to pay tribute to the spirit of Shakespeare than to embrace his own methodology: borrow a story from someone else, retell it in your own voice, and shape it around the world of today—its laws, practices, stigmas and traditions. Plenty of plays, films and operas have done just that (“10 Things I Hate About You” and “Kiss Me, Kate” come to mind), but few with such singular innovation and storytelling prowess as here.

The Q Brothers’ words and rhythms are pulsing, intelligent, honest, infectious and intensely absorbing. You get so lost in this world and its extreme-though-believable characters. The joyous cheers with which the audience responds to the feisty and abundantly clever wordplay is probably rather akin to an Elizabethan audience’s response to Shakespeare’s own verbiage. The heartily enjoyable, sassy all-drag deluge, “It’s A Man’s World, But He Ain’t Nothin’ (Without A Woman or A Girl)” is particularly uproarious.

This remix borrows and departs from “Othello” in a rebellious manner recalling “West Side Story,” a show that reminded American audiences that at the underpinnings of “Romeo and Juliet” is youth-propelled lust and heat. “Othello: The Remix” burns with that passion, and its metered hip-hop is not an accessory; these performers live and breathe it. GQ makes a most mischievous, self-serious Iago that would be the pride of any traditional “Othello” and Pringle’s title character, with focused support from his three fellow actors and onstage DJ Clayton Stamper, murders Desdemona more cold-bloodedly and viscerally than you will have ever seen. On opening night, a lengthy post-war silence followed.

This is the American premiere of the Chicago Shakespeare commission. “Othello: The Remix” had its original debut at none other than the Globe Theatre in London. Intimidating, no? Though this is the piece’s first presentation in the United States, it certainly will not be its last. The nation’s Shakespeare theaters would be completely foolish not to bring this idiosyncratically funny and blistering work to their stages. After all, “Othello: The Remix” is nothing short of El Dorado for Shakespeare theater programming; it’s a work that simultaneously makes the Bard more accessible to a broader audience, while still challenging its viewers’ wit, imagination and intellect—shattering their preconceived notions of Will, be he Smith, I.Am or Shakespeare. (Johnny Oleksinski)