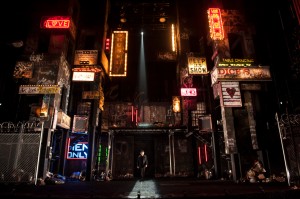 As the curtain rises on a nun in rapturous reflection, with the pulsing sounds of Donna Summer’s “Love to Love You Baby” scoring a sprawling, bawdy set of dirty neon and dirty sex behind her—various other states of rapture—and a man, post-coital with his hooker, holding a pistol to his head, the fever dreams of Calixto Bieito’s “Camino Real” so easily recur that you might feel like you’ve returned for another dose of the Spanish director’s controversial staging at the Goodman last season. But then, with its decadent seventies setting, its garish pimp clothes and graphic glimpses of illicit sex acts taking place upstairs, Steppenwolf’s recent “Hot L Baltimore” comes to mind as well. So too, with its moments of slow-motion choreographed ensemble entrances is a bit of Quentin Tarantino’s “Reservoir Dogs” in the mix. But lest you think that this production of the Bard’s “problem play” is derivative, know this: It is all Robert Falls’ “Measure For Measure.” A fair bit of William Shakespeare, too, but I’d suggest that never in the history of this play has such a raw and raucous production been seen as Falls hoovers in a half millennium of influences and spits out something wholly original.

This tragicomic story of illicit sex, the tension between living virtuously and succumbing to life’s darker temptations, and the hypocrisy of puritanical leaders is, no doubt, one of Shakespeare’s edgier, but in Falls’ hands, the vice oozes from the very walls and the comedy roars in both lines and physical readings. The pacing crackles throughout most of its two-and-a-half hours, avoiding the tedium that can so easily creep into more reverent interpretations of Shakespeare. But ultimately, the clarity of the ideas that Falls teases out of the work creates a contemporary relevance that I suspect would be present even without the Times Square-in-the-seventies setting and Superfly costumes.

For it’s that perpetual conflict that everyone grapples with, between doing good and not so good that defines this work. With one exception, Falls’ characters are lost in the gray space of life, whether it’s Duke (played so convincingly in both guises by James Newcomb that a Clark Kent bit with eyeglasses actually seems to disguise until it intentionally turns into an, um, hilarious sight gag), who seeks a sort of redemption for presiding over a den of vice by temporarily abdicating his post in favor of becoming a priest incognito; or Angelo, the true center of Falls’ play, rendered with powerful nuance by Jay Whittaker. Falls has referenced Eliot Spitzer as a model for his characterization and it’s a perfect choice; a politician driven toward public nobility but unable to suppress his own personal demons even when they threaten to destroy him. You can see the city itself—New York standing in here for a Vienna that stood in for London in the original—as a character in that mold: a vibrant, colorful, musical place threatened by its own decadence and a random pathological current manifest in the likes of Son of Sam, “Taxi Driver” and the senseless murder of John Lennon, a current that eventually surfaces in a shocking way in Falls’ “Measure” as well. 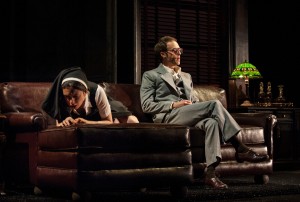 Isabella, the novice nun who won’t trade her virginity even for her brother’s life, is a fish out of water in Falls’ “Measure For Measure.” Played with more sanctimony than sensuality by Alejandra Escalante, her desire to stay chaste is ultimately doomed, one way or another. No doubt in some other times, or some other quarters in these times, her “reward” for her purity would be to marry a prince, but this is not that time or place.

There are delights both large and small crammed into this production, from the visceral intensity of Walt Spangler’s set, to Jeffrey Carlson’s scene-stealing clownishness as Lucio, to crazy little background distractions like the topless beauty dancing in act one to the fellow urinating in the second act, but those are discoveries best left to the pleasant surprises that this production delivers over and over. (Brian Hieggelke)