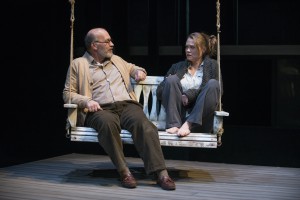 “Proof, ” David Auburn’s 2001 Pulitzer Prize-winning play about the inspiring yet conflicted relationship between a University of Chicago mathematician and his daughter, is making a homecoming of sorts, returning to Hyde Park for a run at Court Theatre.

Director Charles Newell eloquently writes in the program about how the recent loss of a parent made him want to revisit the play and the way in which it deeply resonated with him based on that experience. One of the interesting aspects of “Proof” is that it is a play that can be appreciated from a variety of perspectives: a parent, a child, a sibling, a significant other.

What really jumps out in Newell’s production is the comic brutality of family relationships: how is it that people we love so deeply can so often drive us crazy? In the case of this show, that question is asked rather literally in the sense that the late Robert (Kevin Gudahl), who appears primarily in flashbacks, had a history of mental illness that affected his work and family life. His daughter Catherine (Chaon Cross) had been taking care of him with all of the inevitable curses and blessings that such domestic proximity generates.

Aside from having no real life of her own, the curse is that Catherine is concerned that she, too, might be heir to her father’s condition, a likelihood already believed by her older sister Claire (Megan Kohl) and, at least in Catherine’s vulnerable moments, even by her boyfriend Hal (Erik Hellman), her father’s former doctoral student.

The blessing is the sense of being part of a continuum and family legacy, that Catherine is also heir to her father’s extraordinary passion for math, both genetically and environmentally. 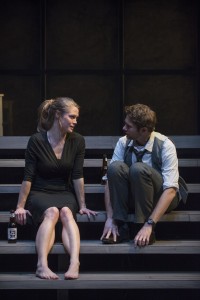 For a show that centers around a university, it is rather anti-academic in tone, making clear that Robert’s genius sentenced him to a life of teaching less-gifted students to make a living. Even when Catherine decides to attend Northwestern rather than U of C—which received a huge belly laugh from a Hyde Park crowd on opening night—the point is made that a lifetime of playing math games with her father gave Catherine far more than a formal education ever could.

What is particularly daring and effective in Newell’s production is the way that Catherine is played as being really over the edge. So much so, in fact, that we, the audience, start to suspect what her sister and soon-to-be boyfriend already believe, that Catherine is indeed already delusional and paranoid. Like them and like Catherine herself, we are looking for proof one way or the other, given a double meaning here as the enviable certainty and clarity obtainable in a mathematical proof is jarringly juxtaposed with the often relentless ambiguity of everyday life.

That ambiguity is persuasively played out throughout the show, again, a rare and daring choice. It is possible to tie up all loose ends, but Newell never does that. Like real life, it is made clear that Catherine’s journey is only beginning with the level of self discovery that attempting to embrace and celebrate who she is just may provide her. (Dennis Polkow)