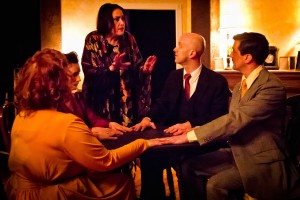 When looking back at the canon of British playwright Noël Coward’s work, it’s easy to see the influence he would have on modern playwriting, particularly romantic comedy. In a genre so riddled with clichés and stereotypes, Coward’s work rises above for language alone and Piccolo Theatre’s production navigates it well. Fluidly moving through the intimate space in the Main Street Metra station, the cast seems comfortable with the often overly verbose script.

Something to consider when performing a play that relies so much on the element of surprise and suspension of disbelief is finding the balance between sincerity and over-acting. Under the direction of Christopher Marino, the grown-up cast knows when to go big and when to remain subtle. Bishop’s performance is occasionally flamboyant, but the charming cast of women enjoy playing off that. Goode’s graceful elegance keeps the antics composed to an appropriate drawing-room level of decorum. On the other hand, McGrath provides the perfect amount of general quirkiness to break up the monotony of upper class civility.

There’s a sexy quality to this piece that’s inherent to the script but certainly played up in this specific production; the lovely McDermott saunters in and out of scenes in a ravishing grey dress, usually accented in a reddish light. Her playful punchiness is a delight to watch. Sex is also frankly addressed in the dialogue, a somewhat necessary topic in a play about remarriage.

After enjoying a star-studded revival on Broadway a few seasons back, “Blithe Spirit” proves that Noël Coward’s work is still as fresh and enjoyable as it was at the time of its debut. Though the wordiness of the work can feel a little overwhelming, “Blithe Spirit” is a light-hearted farce with plenty of laughs. Done especially well by Piccolo Theatre, the special effects are modest but impressive, however, the real gem of this production is the articulate cast members, who approach this piece in a refreshingly literary way. (John J. Accrocco)