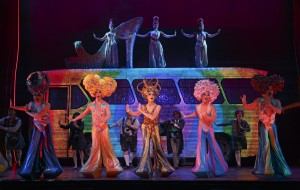 The touring version of the Broadway production of the Australian jukebox musical based on the 1994 Australian film has landed at the Auditorium Theatre.

The film “The Adventures of Priscilla, Queen of the Desert” had a lot of heart alongside of its outrageousness, which is part of why it became the phenomenon that it did. Despite its mere surface-level subject of drag queens, there was an introspection and dignity emphasized, a search for identity and meaning that is universal, to say nothing of the Australian outback used as a magnificent backdrop.

By contrast and despite lifting several plot devices and key lines from the film, the show version superficially goes for take-no-prisoners camp at every step of the journey that primarily limits it to cult appeal.

Thus, if you came of age during the disco era and have a nostalgic affection for those grooves and hits, this show is likely to speak to you. If not, at the very least it can be appreciated as a living light show that is so gaudy and tacky that it makes “Hairspray” seem subtle by comparison.

The premise is a triptych of male friends, including a transsexual, who dress up to the nines as glamour divas and lip-sync to the music of female singers as a cabaret act and the experiences that they have on a road trip on a pink bus named Priscilla. 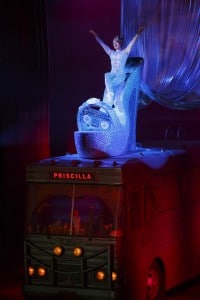 A huge part of what made the film work so well was the deadly seriousness with which the performers took their task. With the show version having live music and live female performers onstage singing the lyrics while the male performers in drag mouth the lyrics in real time—no small feat of coordination—it becomes challenging to fully enter into the alternative world of the male performers as faux women because there are real women singing and dancing in plain view while the men are simultaneously imitating women.

The musical selections in the film were also brilliantly woven into the fabric of the narrative, something that is lacking in the show version, which simply uses any excuse possible to wedge in another hit song, often pausing or even distracting from the action. It is also curious that music central to the film, such as ABBA, is not present in the show due to rights issues.

The collage of hit music of yesteryear that is heard is well-served by a cover band and some fine singers. Nonetheless, it is the choreography that is the dominant element of the show, originally conceived by the late Ross Coleman and recreated here by Joshua Buscher, fluorescently—sometimes almost hallucinogenically—accentuated by intensely colorful costumes by Tim Chappel and Lizzy Gardiner and sets by Brian Thomson. (Dennis Polkow)