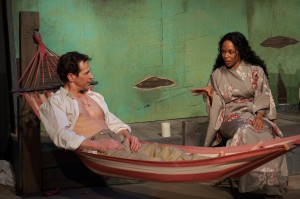 Tennessee Williams had a real gift for portraying vacation towns as sad rest homes instead of the glamorous retreats we like to imagine them. When  “The Night of the Iguana,” one of Williams’ last well-received plays, was first presented on Broadway in 1961, it featured Bette Davis in the role of Maxine, a high-spirited widow who runs a cheap resort in a Mexican town. When defrocked Reverend Shannon shows up with a tour bus of church ladies, Maxine tries to convince him to stay and live out his days at her seaside motel, all the while Shannon hopes he can escape his self-destructive lifestyle.

As with most of Williams’ plays, the action starts slowly, focusing less on plot and more on characterization and sumptuous dialogue, which serves to lay the groundwork for unsettling revelations. In fact, a good portion of the story being told in this play happens offstage through lyrical dialogue. The first act primarily concerns the deterioration of Reverend Shannon in moments of conflict with the church group that proclaims his tour is a cheat and Maxine, who tempts his failure with booze and sex. At first it seems Shannon’s struggle is with his fetish for young girls, but when he meets the grifting artists Hannah and grandfather Nonno (Walter Brody) we learn his struggle is with faith. The tragedy of Williams’ characters is darkly ironic. Often what disturbs us the most are circumstances we feel we can’t get out of, referred to here as “the spook,” and Williams shows how individuals cope when things go wrong.

By the second act relationships are defined and there’s a great rift between sensitive painter Hannah and hardened Maxine and it’s clear that Shannon’s wellbeing is at the center of it. Both Owens and Zola have a firm grip on their characters and fully embody the lines they speak. Owens’ gift for storytelling comes across in the long passages of soothing narrative she exchanges with Shannon in the end of the play, whereas Zola’s harsh strength is shown through confident body language. John Mossman is able to convey the frenzy of a man on the brink of collapse but without extinguishing the light of the man still living.

The Artistic Home nails the atmospheric nature of this play in a simple, yet functional set that shows itself off in the storm sequence closing the first act. Scambiatterra’s vision for this production is faithful to Williams’ script in that it represents the version of reality intended by the author for his dejected souls. It’s loud when it needs to be but deeply thoughtful when necessary, making for an entirely engaging experience that runs the emotional gamut.  (John J. Accrocco)