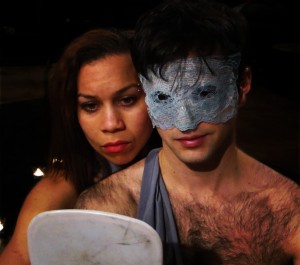 Much in the same way the cinema is using spectacular 3D films and the enormity of IMAX to rip potential patrons from the warm embrace of their plasma screen, legitimate theater is looking to reach new audiences and maintain its existing base by providing experiences that could only happen slap-in-the-face live. So-called immersive theater tends to straddle the line between art and novelty though, with most productions losing their balance and falling flatly on one side or the other—either Punchdrunk’s “Sleep No More” or Disney’s The Haunted Mansion.

There are plenty of occasions when more is gained by kinesthetic interaction than is lost, but such invasiveness definitely does not suit every single play. It is especially problematic when the story requires tonal variance and a decisive journey, a beginning that is distinctly different from the end. I’ve seen many strong audience-enveloping productions, and they are usually either a great deal of fun or totally perverse in their weirdness—a mind-fuck, of sorts. Conversely, I’ve encountered very few where in the course of the play the characters grow or alter substantially. Transforming a space, always a Herculean effort, becomes all the more arduous when an audience also inhabits it.

Such is the prevailing caveat of The Right Brain Project’s “The Bacchae Revisited,” a new adaptation of Euripides’ tragedy that from the offset gets tangled in an inescapable web of boudoir sensuality. Upon entering shoeless into the claustrophobic space, those soon-to-be-rabid maenads pour every audience member a glass of red wine and guide us to our seats surrounding a bounty of lit candles. Enveloped by the viscous energy of a honeymoon staycation, you await scattered rose petals and a heart-shaped chocolate box that never arrive. As the ladies play the happy hostesses, perhaps we too (the menfolk, anyway) are unwittingly contributing to their eventual famed fury. This devised adaptation (with additional text by Randall Colburn) justifies their mania and insatiable violence by having them expose the wrongs that their men have done to them. That “Lysistrata”-style twang of pointed rebellion is a sensible touch, but director Nathan Robbel’s staging never uncovers the tragedy of this, well, tragedy.

Right Brain’s shows, performed in an eighth floor storage-unit-looking space called the RBP Rorschach in a building on North Ravenswood, are inherently immersive. This summer, their “Marat/Sade” had actors outnumbering the audience twenty-nine to twenty in the itsy bitsy theater. This similarly large cast is certainly comfortable with one another and the bond produces a bacchanalian frenzy that is, at times, quite amusing (nudity, however, in such close quarters doesn’t contribute much here). But the orgy of emotion rings of acting-as-therapy while the women convulse and moan and bang on surfaces in that rip-roarin’ way we assume distant tribes must convulse and moan and bang on surfaces. The random crescendos of the Bacchic rituals lack essential mystery and bite, and their subversion must be alluring enough to force a curious King Pentheus to adorn a dress and sneak into their midst.

Robbel connects this revisitation to its Grecian source through mask and ritual. But how much ritual is too much ritual? Every word, it seems, is given some kind of gesture or gently harmonizing chorus, and the over-abundance dulls the meaning. The first moment sees the women dance an over-rigid homage to Isadora Duncan with perpendicular arms, suspense and release that never finds an honest home in the production. The same could be said of the actual flames. In a sequence of pitch darkness, as the women lit matches over their heads in close proximity to hanging fabric, I was far less concerned with Thebes burning than I was with the scorching of the Rorschach. (Johnny Oleksinski)