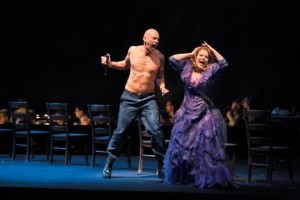 One of the great difficulties in bringing an iconic contemporary play to the opera house is securing permission from the playwright, without which, an opera is not possible.

In the case of Tennessee Williams, many were interested in writing operas of his plays, particularly “A Streetcar Named Desire,” but these were refused. It wasn’t until over a decade after Williams’ death that his estate agreed to let it happen in what by that time appeared to be primarily a financial rather than an aesthetic consideration.

The restriction was that as much of the actual language of the play be preserved as possible. And there you have the fatal flaw that weighs down “A Streetcar Named Desire,” the opera.

Imagine if Verdi and Boito had the estate of Shakespeare looking over their shoulders in creating their operatic version of “Othello,” the opera “Otello,” which even many Shakespeare lovers view as a superior work to the play. A different work than the play, to be sure, thankfully, in the same way that a play is a different art form than an opera.

There is immense irony in the San Francisco Opera commissioning André Previn to compose “Streetcar” as his first-ever opera given that Previn was himself composing and arranging film scores when the movie version of “A Streetcar Named Desire” was done back in 1951. In many ways, there was the sense that much of the music of “A Streetcar Named Desire” the opera was an alternate score, a kind of “What if I had written that iconic soundtrack rather than Alex North,” cross-fertilizing mid-twentieth-century sound summations of the symphonic and jazz worlds, as North himself had done.

The music itself in the opera seems always to be ancillary to the action of the story, more incidental music to the play rather than its own set piece. And in that regard, it is exquisitely crafted. There was the sense that a “Streetcar” ballet or symphonic suite using this same music could be quite effective.

The problem comes in having to take text, a lot of text, and remain so faithful to it. On the stage, words are the medium. In the opera house, music is the medium. And the music here does not create or inhabit its own world so much as act as the aural wallpaper for the singing actors to “sing” their lines, i.e., words. Their words, mind you, not their arias. There are a handful of arias, mostly for Blanche, which interrupt the flow, all of them well-crafted and pleasant to hear, but none of them telling us anything about Blanche that the lines have not already told us more effectively. The rest of the work, all two-and-a-half hours of it, are sung-through recitative where you have Blanche actually singing such mundane thoughts as “I am taking a bath now.”

If you can get over the question of why are so many words being sung so literally, along with the fact that, since these are opera singers where the emphasis is on beauty of tone and sustained vowels rather than diction means that you will have to look up and read surtitles to fully understand what they are singing unless you know the play really well, there is nonetheless a lot here to enjoy. 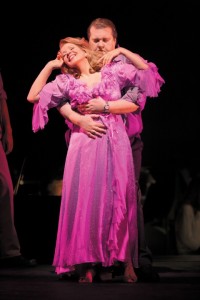 begin with, there is Renée Fleming. Despite her having been the high-profile poster gal for Lyric Opera since taking the position of creative consultant in late 2010 and popping in to sing a few arias here and there, she has not sung in a full-length opera at Lyric since doing a partial run of “La traviata” back in early 2008.

Since having sung the world premiere of “Streetcar” fifteen years ago, Fleming, for whom the work was written, has tried to keep the piece alive by doing set pieces from it in concert and in recital, and there have been a handful of productions here and abroad. But even the Met, where Fleming is a star and for whom she hosts HD broadcasts, would not stage the full opera, and the best that even Lyric would do is a handful of concert performances.

Well, she is a big surprise here. Fleming has made a superstar career out of being a beautiful woman with a beautiful voice, but acting would rarely be noted as a primary attribute. Her singing of Blanche is exquisite, not a surprise given it was tailor-made for her voice, despite that voice being a decade and a half older now. What was not expected is how well she acted what, for any actress, would be a tremendously challenging role.

Fleming is definitely more of the Jessica Tandy school of proper English teacher run amok rather than the Vivien Leigh school of take-no-prisoners sensuality. In fact, in this adaptation, there are never sparks between Blanche and Stanley, which does call more attention to the struggle between them for the soul of Stella. She also seems uncomfortable seducing the paper boy. That the rape goes unseen but happens during an ambiguous musical interlude leaves open the question of what happened, made more ambiguous that, despite Blanche having become unhinged by then, she is still singing with the same dreamy vocalise that she had been employing before the rape.

Soprano Susanna Phillips is a delight as Stella, standing by her man with swagger and singing her bits beautifully. New Zealand baritone Teddy Tahu Rhodes has a gorgeous voice but plays the role of Stanley in too brutish a manner. Part of what makes a great Stanley is that he has to seduce the audience as much as Stella so we become invested in his struggle with Blanche over Stella.

Tenor Anthony Dean Griffey, who created the role of Mitch in the world premiere, is a much more gentle take on that role than we are used to, but it is quite effective. He has true empathy and feelings for Blanche throughout the opera, but also has to think of a domineering mother and his own pride. He lets Blanche go with immense regret, and is a sympathetic listener to her Act II finale where she details her first husband’s suicide.

The orchestra, conducted by Evan Rogister far more effectively than his recent “Rigoletto” here, is set back on stage, which makes the definition of the orchestral colors muted but also makes sure that all singers, being in front of the orchestra, are more audible.

Director Brad Dalton has wisely moved away from the extravagant realism of the San Francisco production to a more psychological staging which includes Stanley’s friends acting as a pantomime Greek chorus, and also includes a vision of Blanche’s husband.

Special mention must be made of Duane Schuler’s lighting, which sets the mood of each scene compellingly. (Dennis Polkow)