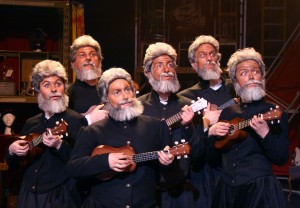 The Building Stage has done something unavoidably moving for its swan song. After eight years of producing in its West Loop venue, its final show, “Dawn, Quixote,” addresses what it’s like to end a journey without a definitive marker of success. Is risking failure, itself, success?

Though Cervantes’ expansive prose and The Building Stage’s personal history are never explicitly tied together, Blake Montgomery and his cast’s adaptation perhaps incidentally mimics the life cycle of a storefront theater: the founding, the mission statement, the shaky beginning, the artistic highs and lows, the comings and goings, the eventual wrapping up. Like Don Quixote’s foolish though admirable embrace of age-old knighthood and chivalry, traditional financial success eludes so many fledgling (and not so fledgling) companies. Has a theater company’s journey from church basement to institutional city fixture become the form’s “impossible dream”?

Perhaps I, like Cervantes and his Quixote, just sallied forth too far into the cerebral, but “Dawn, Quixote” retains an unpretentious fancy in its staging. After an awkward pre-curtain dumbshow with the actors hesitantly wandering around the theater playing games, a playful western commences. Featuring six Quixotes—three male (Michael Hamilton, Gabriel Franken, Nathan Wonder), three female (Chelsea Keenan, Kate Suffern, Anne Walaszek)—dressed identically in big gray beards and black coats, the ensemble fuses the Don with the identity of a contemporary cowboy, righting wrongs and rescuing damsels.

The most inspired flourish of the western party theme is bookending the play with the romanticized Italian high pitches of spaghetti western composer Ennio Morricone. Because the first half of the play has a wash of innocent humor over it (not unlike Cervantes’ source material), sequences are frequently underscored by the shootout theme from “The Good, The Bad and The Ugly” — the one that everybody knows even if you think you don’t. As the journey comes to a close, however, and it does with such solemn reverence, “Once Upon A Time In The West” lightly glides in. Truly, there is no song in existence that better articulates a setting sun on the horizon.

Side by side with the musical reverie is a quick wit and well-choreographed clownish antics. While the intermission-less play takes some time to settle into itself (again, kind of like a theater company), once it does the focus rapidly shifts from Quixote to Quixote. Each actor embodies a different facet of the man—his masculinity, his optimism, his satirical bite, his gullibility—but they all, at one point or another, seem to be paying homage to Richard Kiley’s formidable swagger (“Don Quixote! De La MAN-CHA!”). And lest we forget Sancho Panza, Quixote’s squirely sidekick, the excitable actors all portray him too, along with a storybook of townsfolk, foes and boys who may or may not need rescuing.

During so many moments of “Dawn, Quixote,” gazing upon Jared Moore’s characteristically picturesque lighting and Montgomery’s tall, thrift-store set (really, you can buy just about everything onstage), you grieve for all this lost creativity. But this story departs from Cervantes in a big way. Though Quixote does die as in the book, these Quixotes remain onstage to sing and play their ukeleles to Chris Ledoux’s “Mamas, Don’t Let Your Babies Grow Up to Be Cowboys” as a final open-ended gesture. “Somewhere tonight in the rain and the wind/ I’ll be searching for something and dreaming again/ Chasin’ a rainbow that has no end/ Cowboys ain’t easy to love.” As touching and hopeful last words as there ever were. (Johnny Oleksinski)