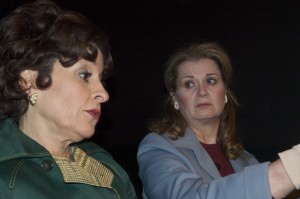 The sixties is a decade rife with fictional opportunity. The example du jour on television is “Mad Men” with its cigarette-smoke clouds and ream upon ream of red velour, but the powder-keg decade is awfully prevalent on the stage too. And it’s no wonder. Besides the umpteen movements that kicked into high gear during the swinging sixties, the assassinations of Dr. Martin Luther King Jr. and President Kennedy were watershed moments in American history—fuel for the raging fire, political and social, that’s come to characterize the moment.

On stage, it’s a decade of self-awareness. With one foot firmly planted in the values of the fifties and another tiptoeing toward the freight-train modernization of the seventies, characters in 1960s dramas can set their watches to the tides of change. For them, the struggle comes from coping with those impending changes or stalwartly fighting back. Sister Aloysius in John Patrick Shanley’s 1964-set “Doubt” clings like a barnacle to the pre-Vatican II days before her husband’s death at war, majorly complicating her suspicions toward a progressive priest; the 1967 rock-musical “Hair” sees a facsimile of flower-child Claude Hooper Bukowski’s mother, “1947,” call him “1967”—“What is it, 1967, that makes you so damn superior?”—before he spells out their generational differences in “I Got Life.”

And then there’s Robert Tenges’ new play, “Elsewhere,” receiving a gentle world premiere by The Side Project. This sweetly sorrowful drama, far subtler than those two other mountainous works, glistens with the golden hue of an episode of “The Wonder Years.” Its characters are curious and the play’s urges and convictions altogether genuine. Tenges’ most honorable success with this work, though, is how comfortably it lives in its period without an overabundance of indication or “groovy” condescension. While the physical locations are minimally realized by director Adam Webster, the personable and frustratedly naïve characterizations of a recently single mother, her teenaged son, their friends and lovers convey the spirit of 1969 with refreshing ease and restraint.

That’s the year Tenges has set his play: a youth and adult coming-of-age drama directed with impressive confidentiality by Webster. The play depicts, among other things, the simultaneous sexual awakening of Monica (Shawna Tucker) and her son Adam (Charles Askenaizer). Tucker, in a performance that’s just maternally vulnerable enough, delivers a strange-to-take-in but calmly emoted speech describing what it was like, as a mother, to watch Adam having sex with his girlfriend Dana (Amanda Lipinski). Accidentally, mind you. Something Monica had expected to be ugly turned out beautiful—not only an affirmation of her son maturing, but also an acknowledgment of an evolving time that she too can be a part of. I was reminded of Republican Senator Portman’s endorsement of gay marriage last month inspired by his son Will. Sadly, before the play reaches its tender culmination, Adam’s girlfriend is treated—by the male characters and the playwright—with the crossed arms of an agrarian patriarchy. It’s not so much her final actions, but the justifications for them that raise eyebrows.

Set in Chicago, “Elsewhere” approaches the three-day-long Days of Rage in Lincoln Park, which wisely never appears on stage. Despite honing in on a cultural shift, it’s not a political play in the traditional sense. Rather it’s a broad acknowledgment of the voiceless acquiring a voice, and the pros and cons of that ascension. In the same way that MTV would further empower youth in the 1980s and the internet would in the 1990s, during the 1960s it was that crucible of Vietnam and megaphones that blurred the line between teen and adult. Adam’s desperation to go to the rally—an event I doubt he anticipated the potential and eventual enormity of—despite his inability to even drive there captures that seminal moment when kids started growing up a lot faster. (Johnny Oleksinski)

At The Side Project, 1439 West Jarvis, thesideproject.net. Through April 21.