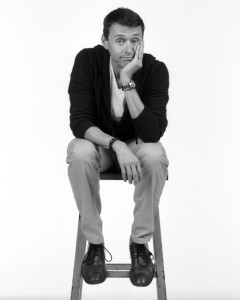 Andrew Lippa, the composer of “Big Fish,” has been very busy readying the show for its pre-Broadway world premiere in Chicago. “‘Big Fish’ is a joyful celebration of life and I think it will deeply move people,” says Lippa. “Not like a tragedy, this is a romance. But I do believe strongly that people will take away that sense of romance, that sense of possibility, that sense of love infused in the piece in the most organic way. That’s my hope.

“I do think we’re heading in that direction. Do I think we’re going to dot every i and cross every t in Chicago? Of course we’re not. We’re here to grow, develop, learn and work and make the best possible show we can. We’ve made fifteen cuts this week alone, whatever seemed to be flagging or had a redundancy. Sometimes we have to add because we’re missing an idea. Chicago is a great theater town that understands that musicals need to be nurtured and developed and loved before you come in the door.”


Lippa was born in England, but his family moved to suburban Detroit when he was three. “You would think growing up in a good Jewish household that the first musical I would be introduced to would be ‘Fiddler on the Roof.’ Instead it was ‘Jesus Christ Superstar.’”

Lippa’s musical influences were “as varied as music itself” but there are three shows that had a huge influence on him. “‘Dreamgirls,’ not knowing what it was,” he says. “My mother used to own a ladies boutique and would shop in New York five times a year and buyers would give her comps to promote shows. And one time when I was along with her they said, ‘Here are some tickets, it’s a show about the Supremes or something. You’re from Detroit, you’ll like it.’ It was through-composed and never stopped moving. It was very cinematic and it was one of those shows where the transitions were the show. The thing that Michael Bennett really made his own was the physical life of the show. The writing moved together. It was a profound experience for me.

“The others were ‘Sweeney Todd’ and ‘Evita.’ Both came out in the late seventies when I was in high school and I discovered them in 1981, not long after they had been written. I always felt that ‘Evita’ was Andrew Lloyd Webber at his best. It had extraordinarily melodic music but also angular and unusually complex music, especially the choral writing. It took really difficult subject matter that paired the writing with the genius of Harold Prince and became this extraordinary theatrical experience. ‘Sweeney Todd,’ again, Hal Prince. If you had to pick one Sondheim show to take with you on a deserted island, it would be that one. Again, it takes a very difficult and complex subject and somehow blows it up into something incredibly human.”

Another influence for Lippa was his being a classically trained pianist who could also improvise and arrange: “I used to teach middle school and the material had the worst accompaniments so I started making them up so I could keep myself interested, let alone the kids interested,” as well as being a singer who even worked as a lay cantor in a synagogue.

“When I was in college, I took a class with [composer and pianist] William Bolcom, an extraordinary man and artist. On my final project, Bill wrote comments with his grade on the back of the music that he felt that I had in common that great tradition of Jewish songwriters in line with Irving Berlin, George Gershwin and Leonard Bernstein.

“Until that moment, I had thought of myself more as a dabbler, I enjoyed writing but did it for fun not necessarily because I was any good at it. Later on when I was cast as the Jimmy Stewart role for the world premiere of [“Fiddler on the Roof” lyricist] Sheldon Harnick’s musical version of ‘It’s a Wonderful Life,’ he was incredibly complimentary about my writing, that he thought it was great, and that I should keep going. Sometimes that’s all it takes, someone you respect and admire telling you you’re really good and to keep plugging away.”

One of the fascinating aspects of Lippa’s writing is that like Berlin, he writes his own lyrics. “That was a gift of doing ‘The Wild Party.’ I discovered ‘The Wild Party’ poem and wanted to turn it into music and my previous collaborator was not interested and I didn’t know anybody else who could do it. So, I tried it myself. Why not? It was the best shot I ever took in my whole creative life. It not only launched that show but an entire career and made my career as a writer possible. I was always interested in writing, in English, in grammar and poetry. I love it so much that I cannot see returning to a point where I don’t write the lyrics to my songs.”

Although Lippa has now composed a half a dozen original scores to shows, the first big exposure he received was “The Addams Family: the Musical” which like “Big Fish,” also opened in Chicago before heading to Broadway. Even those who found that show lacking in other elements by and large praised Lippa’s witty songs.

“I am eager for comparisons; I am no longer the new kid on the block. ‘Big Fish’ is like nothing else I have written and therefore, the music and the lyrics are the most deeply rooted, deeply human, most deeply emotional and romantic score I have done in my career. The story is so deeply human, a man’s desire to be bigger than he really was and his desire to be seen as an influence on his son’s life and a man’s desire to have the best death he could possibly give himself. He wants the best life, but also the best death. I have been contemplating death and I don’t find that to be a downer.

“I am reading Elizabeth Kübler-Ross’ ‘On Death and Dying,’ an extraordinary book. Early on in the book she says that if more people would spend time actually contemplating their own deaths and taking the time to think about what kind of death they might have and might want, perhaps there would be less strife and less difficulties in the world. I find that a profound notion. Edward Bloom [the lead character of ‘Big Fish’] lives a glorious life, but also gets the chance to realize at the end of his life that he has lived a glorious life. Many people don’t take that moment at the end.”

Like Tim Burton, who brought his father’s death to making the film version of “Big Fish,” with a screenplay by John August (who is also writing the book of the musical), Lippa says that the death of his own father also profoundly influenced his approach to the score of the musical version.

“I am Edward Bloom,” says Lippa. “I have to be. I feel what he feels. They are impossible to separate. I go through life partly in reality and partly in fantasy, if only measured by the fact that in what I do for a living, I have to live in an imaginative place much of the day.

“Both John August and I lost our fathers to cancer a few years apart. So when we wrote the final scene of the play, we withheld that scene from ourselves and let the desire to write that scene build up over a very long period of time. One day, we were in a hotel room, I cannot even recall where because we used to meet all over the country and work on the show. We sat in the room and John said, ‘This is what I want you to do, I want you to talk about your relationship with your father, things that made you sad and things that you wish you had done or said.’ We both started talking about our fathers, and burst out crying and became incredibly emotional and then he looked at me and said, ‘Okay, go write the song right now.’ And I did, right there with John in the room. He was working on the scene, and I was working on the song, it’s called ‘How it Ends.’ It speaks to a truth about how we feel about our own lives and how we feel about our fathers.”

Since ‘Big Fish’ has been nine years in development, Lippa has gone through immense changes in his life. “In that nine years, I lost my dad and have gone through tremendous personal and spiritual growth. I am going to be ordained an interfaith minister in June, I’ve gone through a lot of change myself. I’m grateful I have gone through the change and have been able to keep being able to work on this piece about the metamorphoses of life.”

A larger question than what level of success the show will have is the personal response Lippa hopes people will have to it. “What I hope the most is that we’ll see people getting on the phones and calling or texting their parents or children when they’ve seen the piece. That to me would be the ultimate compliment: I need to tell my dad that I love him, I need to call my mom and say something good. I need to call my son and remind him that he is important to me. To me, that’s what it’s all about.”