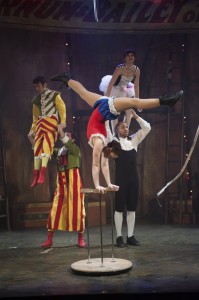 Equal parts humbug and dazzling accomplishment, P.T. Barnum’s life was so extraordinary, it’s amazing someone didn’t think of setting it to music before 1980. And since then, one wonders why the Tony Award-winning show, with a score by Cy Coleman and lyrics by Michael Stewart, has received so few productions beyond its initial Broadway and West End success. My guess is the show’s demands on its cast keep it from being performed more often: the circus may be fun, but it’s hard work.

Mark Bramble’s book breezes through Barnum’s (the solidly versatile Gene Weygandt) remarkable life: his involvement in his American Museum, his touring circus of oddities, his Connecticut political career, his defining partnership with James A. Bailey and his sustaining relationship with his no-nonsense wife “Chairy” (a vocally impeccable Cory Goodrich). They’re aided by a multi-talented cast who sing, dance, tumble, juggle and, in general, work very hard for the money. Standouts include the sultry Donica Lynn, who brings winking good humor and enviable vocals to Joice Heth, billed as the 160-year-old nurse of George Washington (she wasn’t).

While the story’s high points are aided by Brenda Didier and Andrew Waters’ solid choreography and director Walter Stearns’ fast-paced staging, the down times are glossed over. Changing economic climates and bad investment decisions are reduced to a couple of song lines; Barnum’s decision to accompany beautiful opera singer Jenny Lind (a sassy Summer Naomi Smart) on tour strains his marriage, but we never see the consequences.  Some of the ensemble’s circus tricks occasionally appear self-conscious and the cast seems cramped up there on the relatively intimate Mercury stage. But it’s early in the run; more shows under the cast’s belt will make the juggling and tumbling as effortless as the singing and dancing. Hopefully the show will soon look as much like fun as it is work. (Lisa Buscani)