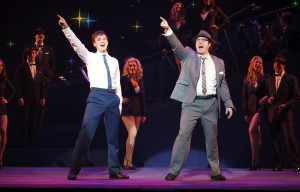 They come without warning, those occasional Non-Equity shows that Broadway In Chicago manages to slip into its lineup. They are usually classics or revivals popular enough to be relatively foolproof. But this time around, a new show is getting the Non-Equity treatment before we have had a chance to experience it at its highest level.

The current national touring production of “Catch Me If You Can” has two strikes going against it: one, as far as can be ascertained under such circumstances, appears to be the property itself. The musical version of Frank Abagnale Jr.’s autobiography and the subsequent Steven Spielberg film doesn’t quite know what it wants to be: a comedy, a love story, a buddy story, a father-son story, cops and robbers, a morality tale, a nostalgia piece.

The other problem is that the Non-Equity cast is at its best moments, uninteresting, and at its worst moments, unbearably amateurish. In a town where we have quality professional musical theater at numerous venues at a fraction of downtown theater prices, for Broadway In Chicago to bring in such a low-quality production at full price is bewildering.

The central element that made the autobiography and the movie so enjoyable was the cat-and-mouse chase of FBI agent Carl Hanratty relentlessly pursuing Abagnale. For much of this musical version, however, that aspect is freeze-framed as the show is a flashback as Abagnale is caught, but he nonetheless stops to tell his larger-than-life story in the song-and-dance terms of the day, i.e., with a pseudo-Sinatra swagger and some June Taylor-like dancing complete with a Big Band onstage, a group of first-class local union players that is by far the best element of the show.

The quality of the singing ranges from runner-up “American Idol” level where every phrase is over-emoted and subtlety and nuance are out the window, to the lead actually singing consistently under pitch and displaying an awkward falsetto in his upper range.

There is such great disparity among the performances that the story, which is by and large true, starts to strain credibility. When both Frank Sr. (Dominic Fortuna) and Agent Hanratty (Merritt David Janes) are more compelling and animated figures than Frank Jr. (Stephen Anthony), you are left wondering how Frank Jr. could have figured out how to run away from home, let alone come up with the various schemes that depend on a charm and charisma that is woefully lacking in this portrayal, to say nothing of eluding capture for so long when he comes across as not having a clue.

The acting of characters both big and small is by and large so wooden, accents so telegraphed, very much like community theater run amok, that it’s best to not catch this one if you can. (Dennis Polkow)