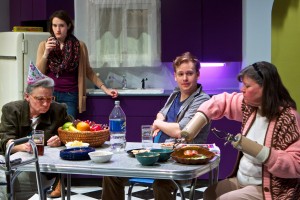 “Maria/Stuart” begins as a dark comedy. Screaming “Hep! Hep! Hep!,” a small red-vest-clad woman traveling in steel-straight lines and muttering menacingly in German storms a kitchen where Stuart (Nate Whelden) is speaking over the phone about his improbable plans for a Chekhov-based comic book. He recognizes the woman. She is Hannah (Scottie Caldwell), his cousin. And she is there, but somehow also on the phone. Doppelgänger Hannah rummages through Stuart’s shelves, tossing glasses and plates with rough-and-tumble disregard, cracks open the head of a Friedrich Schiller bust revealing a hot pink envelope, chugs a two-liter bottle of soda, says “Poof,” and disappears.

That’s as much of a mouthful as it is an eyeful. When described, the situations of Jason Grote’s play sure seem unfathomably odd, but in Sideshow Theatre Company’s production, which opened on Thursday night at Theater Wit, the madcap science fiction exists with tense believability, as though the satellite dish accidentally picked up an alien planet’s soap opera—or sitcom.

What causes Grote’s play to transcend the silly and become truly rather terrifying is his conceit, especially perfect for a Chicago audience. The happenings inside this freak-show New Jersey home are framed as the ever-familiar “family with secrets play,” setting up the audience’s expectations in a traditional mold, all the while messing with our heads and our perceptions of this green and purple reality. As the family gathers for grandma Ruthie’s (Susan Monts-Bologna with tremendous, flesh-ripping comedic timing) birthday, so too begins appearances of a changeling dubbed Maria, who takes the form of each relative and appears whenever a person is alone. She embodies all of this clan’s negativity, vindictiveness, cruelty and disparateness; it’s only when these three sisters contently sit around a kitchen table in the dark that Maria does not plague them—not that they ever realize this, so blinded by their own self-absorption.

As you might imagine, I was especially taken by the darker facets of Grote’s play, but director Marti Lyons’ production is quite hilarious too in its spiteful wordplay and pungent contrasts. Laughing at the handless Aunt Sylvia (Ann James)—maybe crazy, maybe not—munching on slippery cheese puffs with her metal hooks is among the more guilt-ridden sight gags in recent memory. The actors and designers uniformly revel in Grote’s idiosyncratic personality, and scenic designer Nick Sieben’s impressive cross-section kitchen has an aesthetic remarkably akin to contemporary Eastern European theater.

In the play’s final quarter, when a past off-color sexual indiscretion is revealed, its inclusion threatens to derail the play with one too many unlikely happenings. But the fine cast’s honestly forged portrayals prevent any creeping disbelief. “Maria/Stuart” (you don’t need to know Schiller’s “Mary Stuart,” by the way, but there are certain amusing parallels to be found), as funky as it is macabre, has the most distinct of identities blending classic American dramas with science fiction and horror. Alternate titles that streamed through my mind at play’s end included “Death of a Leprechaun” and “Long Day’s Journey Into Gremlins.” (Johnny Oleksinski)