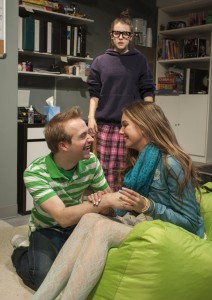 Plays that center around a person’s death are frequently written. What better way is there to showcase a contrast in characters’ points of view than by giving them a mutual target to each have a differing relationship and backstory with? On stage, deaths awaken dormant desires, battles and loves.

Chicago’s biggest theatrical success in recent memory, “August: Osage County” grabbed hold of that device, albeit with a humanity and refinement (a Valium-high, elbows-on-the-table refinement, but a refinement nonetheless). But “The Dream of The Burning Boy,” a lousy shock-and-aww drama at Profiles Theatre set in motion by the aneurysm death of a young man named Dane (Vic Kuligoski), obscures the nuances of grief and, instead, bluntly blurts out its selfishness—and all in that crucible of crucibles, a high school.

Unlike the other student-tragedy plays recently and currently on Chicago stages— “Columbinus” and “Teddy Ferrara”—concerning a school shooting and a suicide, an aneurysm is about as difficult to anticipate and prevent as you can get. That being considered, David West Read’s play isn’t so much about Dane’s death as it is about the loss, and the resulting grief among his friends, family and teachers. “The Dream of The Burning Boy”—outside of its mid-show twist, which so starkly reframes the story that I couldn’t help but laugh at its reveal—focuses on the residual shallowness in the wake of a tragedy.

Dane’s sister Rachel (Alaina Stacey) is a goth-nouveau, in that the usual goth wardrobe of baggy blacks is mixed with newly adopted hot pinks and greens and thick-framed glasses. She asserts that her grief is genetically earned: Dane was her brother and therefore her sadness, theoretically more introverted than the rest, is more deserved than that of his girlfriend Chelsea (Marilyn Bass). But was Chelsea really his girlfriend? Did they break up before Dane’s death, and is she now just adopting this pretense to get some attention? Sister and girlfriend’s mutual friend Kyle (Joel Collins), seizes this opportunity as his chance to court Chelsea. Read paints nearly all of his characters—the exception being the dweebish new teacher Steve (Eric Burgher)— as advantageous through-and-through, and their predictable patterns quickly become tedious.

Joe Jahraus’ direction is geometrically sound in the the Alley Stage, and the performances, while too large too soon—Darrell Cox’s haggard intensity as know-it-all literature teacher Larry, though circumstantially justified, has the creepy focus of an asylum patient—find personable qualities in their characters. Sarah Chalcroft gives a moving, admirably stoic turn as Dane’s mother. And if you perceive a can’t-quite-put-my-finger-on-it innocence from the high-school-age characters, it’s because they’re actually performed by current students. While Bass, Kuligoski and Collins are in their early semesters at Loyola University, Columbia and the University of Illinois Chicago respectively, Stacey is but a high-school senior. At this initial stage in their performing lives, they are all impressively comfortable in their own skin. However, if  “Burning Boy” is any broad indication, the same cannot be said of the playwright. (Johnny Oleksinski)