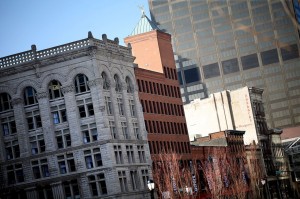 The 37th Humana Festival of New American Plays at the Actors Theatre of Louisville has come and gone. It was the first Festival of Les Waters’ artistic directorship, as well as my first visit to the theater (and city, truth be told). Although I only just lost my Humana virginity, the general hubbub around me indicated that this was the finest festival of the last several seasons. I saw six full-length productions over three days, an experience I think more Chicago theater aficionados should take in. It’s a cheap and easy trip too; I took the Megabus. 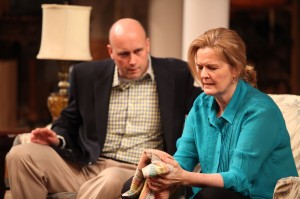 Gary Griffin directs this co-production with Chicago’s Victory Gardens Theater, and the thunderous play will appear at Victory Gardens in the 2013-14 season. Chicago audiences have much to look forward to. Branden Jacobs-Jenkins manages something rather astounding: he speaks to an audience exhausted from family plays and race-relations-themed plays, and makes us take another look at a genre we thought we’d had enough of. Set on a decrepit former Arkansas plantation, a family returns home after the death of the patriarch. It sounds like “August: Osage County,” I know, but Jacobs-Jenkins’ characters, unlike Letts’, are as relatable as they are detestable, and issues of a nation’s turbulent past are dredged up boldly and unapologetically. The conflict is set in motion when the family stumbles upon a book filled with black-and-white photos of lynched African Americans, assumed to have belonged to the now-dead father. Is it a historical artifact? Should they sell it to a collector? Or should it be forever forgotten? Jacobs-Jenkins’ second act becomes, at times, too languid and dependent on a repeated cicada metaphor, but its final wordless sequence depicting a decade or more of household degradation (a hoarder’s palace designed by Antje Ellermann) leaves lingering ponderings about the messy lives of rooms and places. One hopes, at Victory Gardens, actress Jordan Baker will repeat her curmudgeonly performance as Toni, the oldest sister. Baker’s sharp tongue and world-weary vulnerability are essential to the success of Griffin’s exquisite Louisville production. 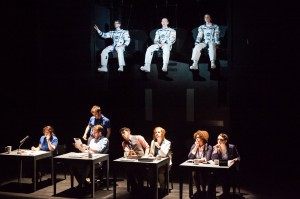 This year’s acting apprentice performance, a three-part musing on sleeping, dreaming and nightmares, unexpectedly contains my favorite play of the entire festival, a surreal spacewalk called “nightnight” by Lucas Hnath. The first play, “Comfort Inn” by Rinne Groff occurs in a circus-like sleep study center, giving new meaning to the not-so-old adage, “nothing good happens after midnight.” The first two plays work well together as a pair, with Anne Washburn’s middle piece borrowing elements from the bookends in a dreamlike rehearsal featuring flight, and most profoundly nightmarish, group blame and finger pointing. In Hnath’s thirst-quenching coda, two American astronauts and one Russian cosmonaut (Chicago actor Ethan Dubin) go into space on a mission to repair the space station, but Tom (a quietly anguished Jeff White) cannot sleep for days, compromising himself and the mission. Hnath manages a cool geekiness in all of the plays, so many of which are based in worlds of fact contorted by the playwright’s own playful fictions. The astronauts’ dialogue briskly moves, punctuated by a radio’s beeping; the effect is listening to a years-old recording that you, perhaps, should not be privy to, but you listen anyway. 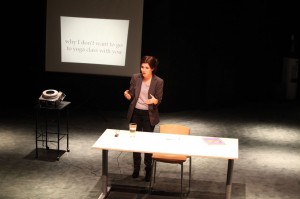 Any festival of new work is going to have its share of stumbles, and Mallery Avidon’s play, or project, or art installation is one of the few. A three-fold ninety-minute work, the first section is a lecture from a woman (a matter-of-fact, analytical Rebecca Hart) describing her childhood experience of growing up in an ashram in South Fallsburg, New York and following the mysterious Siddha Yoga leader, Gurumayi. The second section is an overlong, audience-involving mediation and the third sees the woman in the first section cross paths with film star Julia Roberts as an extra on the set of “Eat, Pray, Love.” Though not entirely uncompelling and certainly brave in its attempts, “O Guru”‘s incessant efforts at pestering the audience causes resentment, stifling its voice. The Western commoditization of Indian cultural and religious iconography and practice is clearly put forth, as is the lecturer’s desperate craving for enrichment and purpose—one that meditation’s “staying present” will no longer feed. But her human experience, despite the piece’s direct address and optional audience participation, is never shared. It exists in an impermeable bubble. 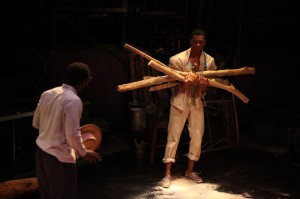 Set in 1964 near Port Au Prince, Haiti, Jeff Augustin’s drama of art and revolution ventures in one too many directions and fights two too many battles. A husband’s (Jonathan Majors) sexless relationship with his wife Judith (Natalie Paul) while on the brink of a new Haiti; his passion for art and self-imposed resistance to politics; his hidden home and nameless identity; his emotional attraction—perhaps physical too—to a young man named Edwin (Andy Lucien) building a rickety escape boat. All of Augustin’s threads are potentially of interest, but none are explored deeply enough to make heat from the friction. Yes, they all coalesce, but blandly and without the rigors of conflict, confrontation, betrayal, sexuality and innate human survival instincts. Though the play drags, the material comes across as slim. 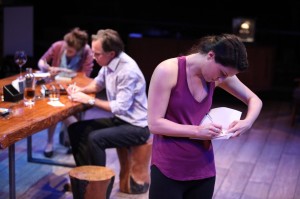 Sam Marks’ play fits snugly on the timeline of drunk-evening-gone-awry plays post Edward Albee’s “Who’s Afraid of Virginia Woolf?” As the booze pours, the wits sharpen and the secrets unveil themselves. And you can’t get much wittier than a play where three of the four characters are writers. A squirrelly editor father named Frank (Bruce McKenzie) and his aspiring-author daughter Adrianne (Catherine Combs) have taken a trip out to his much more successful friend Thomas’ (Jim Frangione) cabin for the weekend, largely so the two men—Thomas being a famous novelist—can discuss Frank’s new book. Arrogance gets the better of the fathers, and their daughters are whisked along for the bitter, contemptuous ride. The performances here, Frangione in particular, have a tendency to give into the pretension of Marks’ dialogue, which is already hifalutin’ enough. But Meredith Forlenza’s turn as Ellen is delightfully sassy and easy to relate to. The play’s climax is, like Albee’s, a game. And like any play with a cruel, mean-spirited competition, the game is the play’s strongest portion. 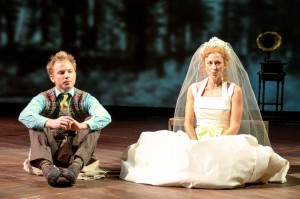 My final performance of the festival was “Gnit” (pronounced “Guh-nit”) by Will Eno, whose “Middletown” was well received at Steppenwolf in 2011. A punk-ish adaptation of Ibsen’s “Peer Gynt,” Eno, without adopting a specific time period, transposes the chauvinism of the Scandinavian early realist master’s play into a sarcastic and modern, though still poetic, way of life. And the product is hysterical from beginning to (nearly) end. Eno’s finest rendering of the obtuse and reactionary mindsets of the time is imbued in a one-man town mob, who chants, condemns and makes small talk with himself hilariously. The two-act play breezes along, thanks largely to Eno’s gift for plotting; While an adaptation, this spawned creation is surreal, comic and otherworldly. Dan Waller’s Peter is quite fine, huggable while repulsively bro-ish, but he grabs at emotions as the character enters old age. The monochromatic spectrum of Eno’s words need not be gussied up with shows of sadness. Waters’ terrific direction though, spatially and tonally, brings out the playwright’s text with flair and style.”Gnit” should come to Chicago ASAP.

The Humana Festival of New American Plays occurs annually every February through April at the Actors Theatre of Louisville in Louisville, KY. Visit actorstheatre.org for more information.