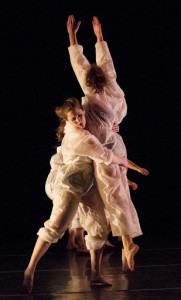 During the intemperate months, the stage of the Pritzker Pavilion is protected from the elements by massive windows spanning the entire proscenium. It allows park visitors to gaze in at the gorgeous wood construction of the stage and yearn for the coming warm weather and free performances. Over two weekends, it is allowing a small audience to gaze back. Four contemporary dance companies—Hedwig Dances, Same Planet/Different World, The Dance COLEctive and Zephyr Dance—are using the enclosed stage as an intimate venue, placing the audience upstage in the choir loft (seats I recommend if you don’t grab the first row on the floor) and dancing with the expansive Pritzker lawn and Art Institute Modern Wing’s gentle glow as backdrop. Two companies share a bill each weekend; last weekend Hedwig and SPDW alternated pieces in a program that shifted moods as frequently as the Chicago spring. Hedwig opened with “Double Helix” by artistic director Jan Bartoszek, set to poppy synth with white-clad dancers using props—sawtooth-shaped when closed, massive sheets of folded waffle when open—to sometimes-surreal effect. During one movement of “Double Helix,” bodies and props created architectural lines that referred smartly to the overlaying lattices of window-support grid and the massive steel trellis above the Great Lawn. Next came SPDW’s “Unfix,” a short, aggressive duet by Robyn Mineko Williams set to dark electronica. Hedwig returned with itchy, twitchy “Por Dentro” by company member Michel Rodriguez, a highly tactile piece fueled by pheromones, adrenaline and capoeiraesque partnering. SPDW closed out the program with two contrasting pieces by artistic director Joanna Rosenthal: a cabaret-like solo for a gorgeously vampy and sinewy Adam Gauzza entitled “IT is What it IS,” and “Altered,” a quartet in which we witness disjointed ideas gradually gel into fluidity and coherence.

This weekend, it’s Zephyr and The Dance COLEctive’s turn to play. Margi Cole will present “My Sufi Tale,” inspired by Nana Shineflug’s 1998 “Sufi Tales” and “Moving Stories,” a touching, theatrical piece about how we create and define our homes. Zephyr artistic director Michelle Kranicke has created a new piece specifically for the unique venue entitled “40 Minutes From November.” Kranicke is a choreographer sensitive to the energies and peculiarities of spaces and her interaction with the Pritzker stage should be transformative. (Sharon Hoyer)