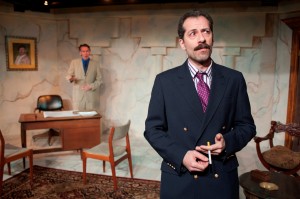 There’s realism and there’s allegory. And “In A Garden, ” playwright and screenwriter Howard Korder’s discourse on beauty, culture and nationalism, falls somewhere in between. Unfortunately, it mostly falls into the gulf that separates the two.

Hackett (Lawrence Grimm), a young architect with a promising career consisting of good press and a number of medium-sized projects underway, arrives in the fictional Middle Eastern country of Aquaat to meet with the friendly but snaky Minister of Culture Othman (Rom Barkhordar) to discuss a new project for the Aquaati government. And after three days of frustrating delay and roundabout conversation, Othman finally details what he’s looking for: a summer house. Or maybe a gazebo. Or maybe they’re the same thing.

So begins a decade of meetings, debates and relationship building between the American architect and the American-educated Minister, who effuses over American culture, praising both “Die Hard” and “Dead Poets Society” with equal excitement, while purporting to be in charge of maintaining the purity of Aquaati culture. As the project becomes bogged down in bureaucracy and personal interest, the two characters form a tentative friendship and execute a nuanced power struggle, with Hackett constantly reminding Othman that he is merely a “client” (not a “patron”) and Othman consistently referring to Hackett as “my architect.” So who is in control?

“Aha,” you say! It’s an allegory for American involvement in the Middle East! And as allegories go it’s not a bad one. But that doesn’t necessarily make it a good play. Korder’s script can get somewhat rambly, with characters espousing opinions to each other only to drive home points about cultural misunderstandings, bluster and hubris. At two hours (with a ten-minute intermission), the show feels several scenes too long. And though they are meant to imply time passing, the numerous scene changes, filled with edited audio news clips from the time period and vaguely Middle Eastern music (sound and music by Josh Horvath) drag down the momentum.

The comedy in Korder’s script can be distractingly broad and director Lou Contey plays these moments up rather than down. Kazakhstan may not be in the Middle East, but when Barkhordar, with his lanky frame and thick black mustache, delivers lines about Aquaati culture (like the ceremonial “Circumcision Suit”—you know, the suit a young man wears when he gets his foreskin removed on his thirteenth birthday), it’s hard not to see Othman as a legitimized Borat. Similarly, Emilio G. Robles plays Najid, the bereted ruler of Aquaat, almost entirely for comedic effect.

Perhaps this light treatment is meant to build up to the rather dramatic reveals in the final two scenes, but by the time we get there it’s difficult to connect to the lives of these two dueling representations of culture in any personal way. Still, there’s a general feeling of tragicomic confusion and turmoil that sticks with you after the show, capturing the lack of understanding that is inevitable when differing cultures are thrown together and asked to collaborate. (Zach Freeman)