He moved on from there to another program called Village South, a rehabilitation center, which “took on the egis of taking students, some of whom’s parents were already involved in the rehabilitation program—myself included—training them in theater and using them as peer educators to other people in our age group.” It was there that McCraney became creatively involved with Teo Castellanos, the founder and artistic director of D-Projects, who at the time was a recent graduate of Florida Atlantic University. Castellanos, who grew up in Carol City, Florida, also the hometown of Arenas, had come to theater late in life and used it to rehabilitate himself. He saw the potential of what it could achieve in others, and led young people like McCraney in its creation. Castellanos was practical; He knew that “conventional theater” would never reach young people who were raised in towns like Carol City and Liberty City. “You know, we weren’t going to be doing shows for [Steppenwolf for Young Adults],” jokes McCraney. “We were going to be doing shows for halfway houses and juvenile detention centers and correctional facilities.”

So, the guiding force that he is, Castellanos introduced McCraney and his cohorts to the form’s masters like Augusto Boal, founder of Theater of the Oppressed, and director Peter Brook. Brook, the world-famous British director best known in the United States for his book of theory, “The Empty Space,” and a groundbreaking production of “A Midsummer Night’s Dream” would become a personal influence in McCraney’s artistic output years later when they would work together. As would playwright August Wilson, who McCraney worked with while a student at Yale University. Add to that McCraney’s shared birthday with Arthur Miller and Richard Nelson (the head of playwriting at Yale while he attended), and what emerges is serious playwriting royalty.

It is astonishing to say the least that a fourteen-year-old kid was incorporating such advanced material into his work, for even most American university students, including those in theater conservatories, have but passing knowledge of Boal and Brook. But McCraney’s ethic and yearning was anything but ordinary. Learning these principles, he discovered that “theater could be anywhere,” and in his case, “it had to be because, we would come into a space—about this big,” he indicates a teensy area. “There would be a bunch of students lined up around, and we would have to put on a show between this threshold.”

McCraney and his friends knew the stakes of these performances better than anyone. “It would be fine if we didn’t go home to addicted parents or a neighborhood that was full of drugs and crime and alcoholism and sexual abuse, but we were. It wasn’t like we could just get up there and feel good about ourselves if we did a show that was kinda like, ‘Don’t do drugs!’ Put your hands on your hips and walk off. We had to do something that we knew would be compelling to us, and therefore compelling to our audience.” McCraney performed these shows from the age of fifteen—“I think that’s the legal age you can get a part-time job. I was doing it earlier, but you could only volunteer until a certain age when you could get paid for it”—and then he attended the New World School of the Arts, again with Arenas. 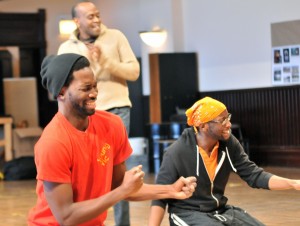 McCraney during rehearsals for “The Brother/Sister Plays”

“During the day I was learning Chekhov, Shakespeare, Stanislavski, actions, intentions, you know, proscenium arch, thrust. The sort of conventional wisdom of western theater.” But in the evening with Castellanos and the Village Improv, they were learning the fringe theater that spawned out of Chicago, South America, Germany, all the while incorporating their own cultural origins—the “Caribbean and Afro-American malaise.” This was when McCraney learned of the Yoruba, the West African people whose cosmology so infused “The Brother/Sister Plays.” His scholarly sensibility has reinforced his plays with a blend of all sorts of diverse influences. “In The Red and Brown Water,” for example, is inspired by Federico Garcia Lorca’s “Yerma” and the African Oya/Oba orishas. By the time McCraney arrived at DePaul University, he had an impossibly well-rounded theater education as an actor, playwright, director, improviser, stage manager. You name it, he did it.

“And then I had to just sort of focus in on DePaul [and only act], which made me miserable.” In his spare time, he wrote plays, and in the summer, ever the dance fan and aficionado, he attended the Alvin Ailey summer dance intensive in order to broaden and diversify his learning. “And also [DePaul’s] program was not as welcoming as it is now. It was exhausting because I came from this place of camaraderie, and we all were working really hard; you were all in it together. And then, to this place where it was like, ‘Well, there’s only gonna be twenty of us by junior year, so…’” He elaborates, “and college is college, so people were having neuroses and breakdowns, and suicide attempts, you know, the things that come with college.”

From the offset, he had a rough time in Chicago, least of all because it was so cold. “The program was a good program, and you can’t beat the training. But it was a very hard time personally adjusting.” He’d moved to a frigid conservatory program where you perform such fare as “The Beaux Stratagem” from a warm-climate, underdog, purposeful, guerrilla theater. He recalls the hectic energy of those days long gone. “We’ve got to put together a huge piece about the AIDS epidemic and the black community, and we gotta do it by this weekend. Go!” McCraney also thinks back to the fulfillment of taking real-life experiences and applying them to his work, something he has returned to as a playwright. “Speaking from personal experiences about my growing up with a mother who was HIV positive, finding that out, what the fears were, what the ramifications were, but also what we knew about it at the time, and putting that into a show and performing it at a southern conference. And we were just a bunch of kids.”