Watch any of McCraney’s plays, and you’ll see, whether thematically or biographically, his wealth of life and knowledge. “He puts his life experiences in the plays,” says Lavey. A simple assertion, but within McCraney’s work, the personal connection is kinesthetically palpable. I ask McCraney how old he was when he came out as a gay man. “I’ve always been out. I don’t remember a time coming out. My family kind of just knew, for better or for worse. It wasn’t like they knew and said ‘Oh, that’s lovely!’; They sort of knew and it was annoying sometimes to points of tension and anger, but I never had to formally come out. It just was always there.”

“Wig Out!” a play about two competing houses of drag—The House of Light and The House of Di’Abolique—was born of McCraney’s childhood wanderings in the drag houses of Miami. “Most people think it’s pretty vapid; I like it a lot.” Subtitled, “A Play 4 the KIDZ,” “the kids,” a term McCraney says was coined by Pepper LaBeija in “Paris Is Burning,” are participants in gay ball culture. “[‘Mothers’] would have these drag houses that had ‘kids’ who were sixteen, seventeen, eighteen, in their twenties, and at varying degrees of coming out, or transgender.” The mother of the house would call them her kids, and the term stuck. McCraney was definitely familiar with drag houses. “I was courting someone who was in a drag house when I was younger. There were a growing number of drag houses or drag balls when I was younger in Miami. I don’t know if they happen as much anymore. The scene there has changed a lot.”

Miami still inhabits an important place in the playwright’s heart. He’s absolutely in awe of the talent that emerges from the city, but disappointed in the migration rate. “Arguably one of the largest contemporary dance theaters in the world [Alvin Ailey American Dance Theater], is run by an African American from Miami. Born and raised. Its principal male dancer is from Miami as well. You have two actors in the Steppenwolf Ensemble from Miami, Florida, who grew up there. You can go to almost any visual arts museum and find work by a Miami artist. You can go to any concert hall or jazz club and find like two artists. You know what I mean? How is all of this happening from this one little small place? Well, it’s because we can’t stay there and do anything. We can’t stay there and sustain the work. We get trained very well, but we can’t stay there. Because there’s nothing to do. So, a lot of what I’ve been trying to do is change that.”

One way that McCraney is trying to improve Miami’s performance art scene is by establishing a Shakespeare festival that’s in its early planning stages. This is the third time he’ll have tried to found such an institution in the city, but his efforts haven’t yet worked out. After he tours a production of “Antony and Cleopatra,” which will begin at The Royal Shakespeare Company, move to GableStage in Florida and finally end at the Public Theater Off-Broadway, he hopes that the company will gain a foothold. But he admits that he doesn’t have the energy to run it himself. At thirty-two, he says he’s getting old, though admitting he’s not quite there yet. His seemingly endless array of projects past and on the horizon are a result of consistent, focused work. McCraney tells me he hasn’t been on a date in about a year and a half, but “who needs dates?” 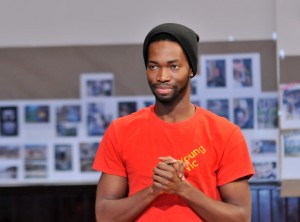 He doesn’t see a lot of plays, either. He quite rightly believes that, after spending twelve hours at the office, why would you go back there at night? What McCraney uses much of his downtime for is watching TV. “TV is so good these days!” He loves “Game of Thrones” and he cannot wait for “Homeland” to come back. He likes “Girls” a lot too, but only when it lives up to the mission implied by its one-word title. “…Except when they do those episodes about the boys. That’s not how boys act at all.” He proclaims as though speaking to an invisible Lena Dunham, “I know you think it is, but that’s not it. Not to say that she can’t write boys, but in that context, I was like ‘yeeeash.’ It’s just not how boys actually work. They’re way too fluid with their ability to speak. And they are saying things like how they feel. Guys don’t talk like that. No guys—gay guys, no guys talk like that.” I’m admittedly relieved to hear that the guy does something to decompress, but even the telly is, well, work-related.

McCraney wants to write for that medium “sooner or later.” Television—particularly scripted cable television—is a more and more common route for playwrights to take to make ends meet, which he understands and embraces. “It is kind of ‘have to’ with TV. But the good thing about TV is that they don’t really care whether or not you’re coming to it because you love it. They’re just like, ‘We need this. Can you do that? Great. We’ll pay you for it.’ I appreciate the simplicity in that transaction.”

Unlike “Head of Passes,” “The Brother/Sister Plays” did not have their world premiere at Steppenwolf—they were first presented at New Jersey’s McCarter Theatre in a co-production with the Public Theater. But a person who has followed them since their inception is McCraney’s longtime collaborator, Landau, the original director of “In The Red and Brown Water,” and the director of the full trilogy at Steppenwolf. She first encountered McCraney at an audition. The actor was a hot commodity shortly after appearing in the world premiere of “Blue/Orange” at Northlight Theatre alongside BJ Jones and directed by David Cromer, and for Landau’s “Theatrical Essays” in the Steppenwolf Garage, she asked the auditioners to display a special skill. The piece was devised, and Landau wanted to embrace her cast’s individual talents. McCraney brought in a dance, and she knew he was cast before his first audition was over. The Capezio slipper fit.

It was during that rehearsal process that McCraney told Landau he was applying to Yale University for playwriting, which surprised her at the time. But he would be accepted and spend the next three years of his studies in New Haven, Connecticut. Upon graduating from Yale—his graduate-school experience was unique in that he’d been working grad-school-hard since his mid-teens—Landau heard from McCraney again. He’d written a play called “In The Red and Brown Water,” the first of “The Brother/Sister Plays” and hoped Landau would direct it. She said, “Yes. Well,” she corrects, “I said, ‘Send it to me first.’” He did, and all it took was reading one page to know that she would take on the project, beginning a vital partnership.