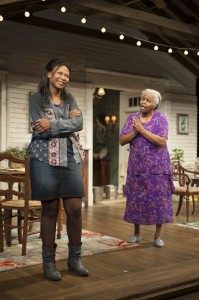 Shortly after “The Brother/Sister Plays” began at Steppenwolf, the company approached McCraney with a project to write a play based on the biblical Book of Job. The idea had actually sprung out of conversations between Landau and the actress Amy Morton. The two thought the Job character would complement Morton’s darkly comic persona, but so too thought it would complement McCraney’s style, sprawling while communal and ritualistic. His plays are often described as mythological. “The Brothers Size,” though thought-provokingly set in the “distant present,” has the weight and energy of a classic play. However, while a classic like Arthur Miller’s “A View From The Bridge,” fulfills a meat-and-potatoes craving, McCraney’s are a more refined quantity, though not missing any punch. I like to think of his plays as umami—a Japanese word meaning “savoriness”—the fifth taste. That term was created to describe the otherwise indescribable sensation of chicken soup lingering on the back of the throat. That’s the feeling you get in “The Brothers Size”’s penultimate scene, when Ogun and Oshoosi Size sing Otis Redding’s “Try A Little Tenderness.” The surreal sequence is, perhaps, the first time in the play that the lovable-hateable brothers let down their guard and put away their antagonistic though humorous bickering, so overcome by music and memory.

OSHOOSI SIZE:
Hold the hell on.
Coming.
I’ll be right there.
Turns on music.
Otis Redding, Try a little tenderness.

OGUN SIZE:
That sweet song start playing.
I didn’t know you had this song.

OSHOOSI SIZE:
Every man need a copy of this song.

OGUN SIZE:
Man you use to sing the hell out of this song.

OSHOOSI SIZE:
Still do.
But I need a piano man.

OSHOOSI SIZE:
Ah n—- just play whatever but in the back.

OSHOOSI SIZE
(Singing with the music…)

OGUN SIZE:
I think I’m a switch to drums.

OGUN SIZE:
I thought you would enjoy that brother.
C’mon sing the song.

The song sedates the audience into the brothers’ space and mind, only to be shaken out of it by the devastating, but no less loving ending. More humorously, The Fates 3 in “Wig Out!,” a sassy-wise chorus, do a fierce lip-sync to “Alone Tonight” from Spike Lee’s “School Daze.” McCraney loves music and dance. A longtime fan of Alvin Ailey American Dance Theater, in March McCraney and some of the cast went to see the company perform Ron K. Brown’s ballet, “Grace,” McCraney’s “favorite piece ever,” at the Auditorium Theatre. “We went twice,” and subsequently he played with aspects of what they saw in that week’s rehearsals. He doesn’t fancy himself a dancer, but Landau says she’d easily cast him in a dance piece, or as Richard II. He’s a kind of modern-day renaissance man. McCraney’s transmutation of one form into another is something that Landau admires about the playwright—his awareness of space, light and music in addition to his words. He also takes an active role in the production’s design.

Landau, who generally prefers not directing new plays, was immediately attracted to McCraney’s style. “Head of Passes” is proving the playwright’s acuity for not only the mythological, but the biblical too—the difference being that faith is incredibly risky terrain in the American theater, which Lavey describes as mostly “secular.” It’s not as though there aren’t plentiful religion-related plays. “Late Nite Catechism” has been playing across the street from Steppenwolf at the Royal George for decades. But plays of and about faith apart from the religions’ institutions—those, we don’t see much of. Landau says this is “brave” for McCraney to be treading the murky waters of faith that many artists dare not tread. For Landau’s part, she’s so pleased to be riding in his wake. 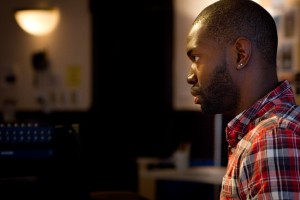 Over two days in October 2012, the first workshop of “Head of Passes” was held. This was before any line of dialogue or stage direction had been written, and the writer and the room were a veritable tabula rasa. With no text by McCraney, the group—including McCraney, Landau, current cast members Glenn Davis and Cheryl Lynn Bruce, and three or four other actors—sat down around a table and simply read aloud “The Book of Job.” “It was fun. I have to admit that I’m kind of geeky about that stuff,” says the closet scholar. “That stuff I can actually do forever. It’s the other stuff that’s like…” He makes a sideways face. By this, he means the act of justifying his choices with longwinded reasoning. Something McCraney loves about Steppenwolf and this process in particular is that the company is so intent on being solely about the work, and not “the other stuff.” He’s had no roadblocks or impediments along the way. From deciding to make the Job character a black woman, to setting it on the Head of Passes along the southern portion of the Mississippi River, to cutting what he wants to cut and adding what he wants to add, the theater company has been completely supportive.

“We [workshopped] for like a week, and eventually we sort of had to get to the point of what is it evoking in us personally. And that kind of became a much easier, more concise conversation because the ‘Book of Job’ can be sweeping, and you can get into it in a whole lot of ways. But at the end of the day, it will only affect you personally, to the core, in an idiosyncratic way. The way it felt to me is not going to be the way it feels to you personally. Whatever that means.” After that initial workshop, McCraney felt he had enough to go off of, and began to write. A great deal of what was discovered during that workshop ended up in the play’s final production, if you can call it that. McCraney insists that, as a playwright, he is never completely finished with a play—only with drafts.

Landau says this is one of McCraney’s only plays “with a concrete, representative structure.” Though it will, at first, seem to be the sort of standard fare she refers to as “a play play,” the work breaks free of the conventions it initially establishes, as one might expect of McCraney. “It’s not a trick” though. The intent, in fact, is just the opposite. Their goal is to welcomingly envelop the audience in a homey environment. So, logically, the central focus of David Gallo’s set is a sizable white house, with a well-realized interior and a physical life of its own.