McCraney and I meet up again the day of “Head of Passes”‘ first preview. This time, my light-blue tee-shirt has a coffee stain. I couldn’t find matching socks. McCraney, on the other hand, sports a black blazer, low-top Chuck Taylor’s atop blue socks with yellow polka dots. Something about this seems right for the day of his first performance with an audience.

“Hi, Tarell!” shouts Landau in Steppenwolf’s Downstairs Theatre. From a shadowed figure in the back corner seat of the balcony emits a quiet but well supported “Hey.” Their working relationship, besides being artistically fertile, is really cute. And for many, extremely surprising. Landau says the reaction to the team is usually how can “this guy from this and that chick from that” be so in tune—for they truly can complete each other’s thoughts. She loves how active and engaged he is in the rehearsal process. When Landau directed “Wig Out!” at the Vineyard Theatre Off-Broadway—she is actively pursuing directing the Chicago premiere of the play—McCraney would dance and move with The Fates 3 so often, they took to calling him “the fourth Fate.” During “Head of Passes,” often when an actor is out of rehearsal, McCraney will perform their role. His style and behavior as a playwright today hearkens back to his days slapping together plays for young people in difficult circumstances. He wears whichever hat they need him to wear that day.

Now in the theater with the completed set, McCraney enjoys observing from the second level, occasionally offering advice or answering questions from his near-invisible perch. His responses are usually warmly curt: “Yeah.” “Okay.” A Steppenwolf staff member tells me that McCraney will occasionally lie down on the ground up there in the front row to listen to rehearsal, and no one will realize he’s there. I ask McCraney what previews are for him. He says, “rehearsals with an audience.” He’s excited, but not overbearingly enthused, understanding that there is still much work to be done. Even with an audience coming in that night, the actors, rehearsing Act II Scene 2, receive cuts at one o’clock, six-and-a-half hours before curtain. 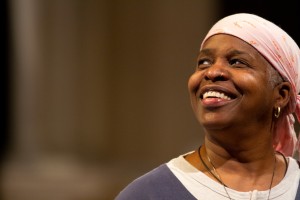 The cast and creative team are very familial, and it’s no wonder why. Two cast members, Jacqueline Williams and McCraney’s school-days friend Alana Arenas, also appeared in “The Brother/Sister Plays.”

Playing Shelah, McCraney’s Job figure, is Cheryl Lynn Bruce. Reinforcing an already lively family portrait, Bruce was really-truly McCraney’s professor when he was still a student at DePaul, and softly he refers to her as “ma’am” or “Miss Cheryl.” So does Landau. During the time I spent with McCraney, I always noted his politeness and personal refinement; He conveys a learnedness and respect that he brings into rehearsal as well. Bruce has a mammoth monologue in Act II, as one might expect of Job, which gets the main focus at rehearsal today. McCraney seems delighted to watch his former teacher take on his material, giggling loudly at each and every joke.

Working through the scene, Landau will stop Bruce every so often to change something, while reassuring her, “I got your back.” “I know you do, coach.” McCraney hangs up in the balcony, Converse shoes resting on the rail in front of him like a more personable, stylish God looking down at his Job. Across the house, that’s how I see him too. An already powerful theater artist whose impact on this city, this country, and this world has only just begun. Briefly shattering my subdued hero worship, I discover he also has another more humbling Godlike duty coming up. “Did you pass that class in how to write pre-show announcements,” asks Landau? Without missing a beat, the abundantly charming McCraney responds, “I did not.”