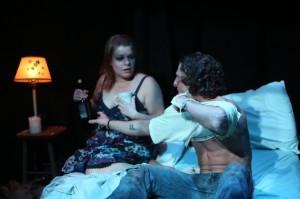 When a chance meeting in a bar turns into an emotional landslide, it’s often called a one-night stand, or dating. In John Patrick Shanley’s one-act play “Danny and the Deep Blue Sea,” we’re taken to the pits of desperation when tough guy Danny (Brandon Galatz) starts a casual conversation with tough gal Roberta (Jodi Kingsley) over a few beers. At once their interaction seems stunted but curious to the weary onlooker, however it’s fairly soon established that Danny is extremely unstable.

The revelations flow pretty quickly in a somewhat unnatural way, but are delivered with the utmost sincerity by Kingsley and Galatz. Both characters hover around thirty, but the actors themselves appear older; a wise choice in casting considering the characters’ lives. Roberta is a single mother living with her parents in a rough sector of the Bronx while Danny is a shiftless thrill fighter with bloodied knuckles.

There’s a certain push and pull of gentleness versus abrasiveness between the two that at first appears normal, but quickly becomes absurdly melodramatic. The problem lies in the small space and the lack of subtlety in Shanley’s script. There are simply too many emotional peaks in the first scene and occasionally Galatz chooses loudness to illustrate an obvious character flaw. Kingsley on the other hand is incredibly smooth in her transition from independent to extremely needy.

Inevitably Danny and Roberta change locations and wind up in bed together. Suddenly Danny’s walls come down, but Roberta’s go up. In spite of  genuine moments of romance between the two, it’s hard to buy the unlikely intimacy between such terminally damaged people. There’s not a central argument between the two either, which becomes problematic as the same material and revelations are rehashed to the point of losing their punch. “Danny and the Deep Blue Sea” is essentially an exercise in how self-destructive and incompatible an author can make his characters and still expect an audience to sympathize.

Luckily director K. Hannah Friedman succeeds by somewhat toning down the overwrought dialogue and minimalizing the staging. Instead of beating us over the head with the sad quarters in which Roberta lives, Friedman takes the understated route: a mattress on the floor, a mug of wine for two and a cheap candle to symbolize Roberta’s skewed idea of romance.

Though Galatz and Kingsley do a good job navigating the deep blue depths of the script, in the end the characters, and the weak ending, aren’t worth the time.  (John J. Accrocco)