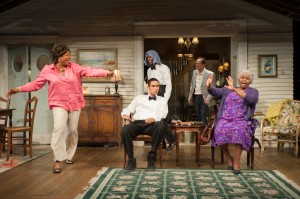 Look at the Head of Passes on a map and you’re not likely to think of it as a place to set up a bed and breakfast. A no-man’s land of bayous and marshes sticking out into the Gulf of Mexico just southeast of New Orleans, a person would have to have a lot of faith to venture out there, let alone intentionally set up a house and an entire life. Luckily, faith is exactly what Shelah (a stand-in for the biblical Job, powerfully portrayed by Cheryl Lynn Bruce) has by the bucketload in Tarell Alvin McCraney’s Book of Job-inspired new play, “Head of Passes,” now receiving a world premiere on Steppenwolf’s mainstage. And as with Job, her strong faith will be repeatedly put to the test as tragedy after tragedy befalls her.

As the show opens, we hear the sound of blowing wind and see a string of flickering lights. After a strong gust, a single bulb in the middle of the string burns out before slowly coming back to life and eventually burning brighter than the others. This simple but important opening segment is not only a subtle preview of the design wizardry David Gallo’s incredible set has yet to reveal (coordinated with Scott Zielinski’s impeccable lighting design), but, more importantly, a hint at the emotional arc to come.

With a houseful of unexpected guests, widowed matriarch Shelah is, unbeknownst to those around her, trying to find the best way to tell her three adult children that she is suffering from an incurable illness and is not long for this world. But her middle child Aubrey (Glenn Davis) is planning a surprise birthday party for his mother, inviting everyone he sees, including Shelah’s best friend Mae (Jacqueline Williams) and even her doctor (Tim Hopper), who’s more aware than anyone of her condition, out to her slowly flooding house in the middle of a terrible storm (Gallo’s ceiling constantly drips from various places to highlight the growing water issue). 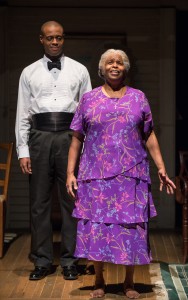 Creaker (Ron Cephas Jones) and Crier (Kyle Beltran), a father-and-son team working for Shelah, share a love/hate relationship played for hilarious comedic effect at first before taking a dramatic turn. Cookie (Alana Arenas), Shelah’s estranged and troubled (kind of) daughter has more history with her deceased father than anyone has suspected. And Shelah’s sons Aubrey and Spencer (James T. Alfred) are attempting to work various angles to get their mother to move out of her crumbling estate and the treacherous Head of Passes altogether.

In the midst of this action, stalwart Shelah attempts to maintain her composure under a guise of health and sanity. This is especially difficult as any time Shelah is left alone a beatific gentleman angel (Chris Boykin) appears to offer cryptic comfort and guidance, often leaving her stunned and displaced. Under the direction of Tina Landau, this powerful ensemble plays each of these stories out with idiosyncratic perfection.

Landau makes even the most elaborate scenes seem effortlessly staged. Early on, a tableau is presented to the audience consisting of Creaker and Shelah arguing loudly in the foreground, Crier singing to himself in the background and Mae surveying the situation bemusedly. This depth of multiple, simultaneous character development is emblematic of the piece as a whole, with several storylines unfolding at once, coinciding and connecting with each other through McCraney’s rapid-fire dialogue.

Aside from the supernatural appearance of the angel, the first act of McCraney’s epic (it seems odd to call a show that clocks in under two hours with a ten-minute intermission “epic,” but there it is) story plays out as a realistic family comedy-drama, heavily rooted in complicated relationships that have developed over decades.

The first act climaxes with a scene that is visually jaw-dropping, in the most literal sense of the word. In fact, it took me several seconds to even realize that my mouth was literally hanging open. It’s so impressive that early on in the second act when Shelah points at her house and demands, “That don’t impress ya’ll?!?” of those around her, you feel compelled to respond that it certainly does.

“The Lord giveth and taketh away,” Shelah repeats confidently throughout the show, only in her case maybe he’s taken too much at once, leaving her standing alone on her back porch, clad only in tattered white garments and delivering a lengthy sermon to herself for the majority of the second act. It’s a stark transition from the elaborate and intricate first act, and risks losing the audience, but Cheryl Lynn Bruce delivers every moment with such captivating force that it’s impossible to look away.

McCraney has been a Steppenwolf ensemble member since 2010, when the three plays in his “The Brother/Sister Plays” series were performed in repertory to consistent critical acclaim. While “Head of Passes” has some of the same fluid dialogue and “distant present” southern setting, it feels like an evolution of McCraney’s style. Tighter, more grounded and dramatically ambitious, “Head of Passes” speaks to the timeless human condition with humor, candor and intellect.

“You just tell what you see. But man ain’t tall enough to see all,” Shelah tells her son Aubrey. The Head of Passes may not be an ideal place to set up a bed and breakfast or weather a storm, but it’s certainly an ideal place to learn what man can and cannot control. (Zach Freeman)