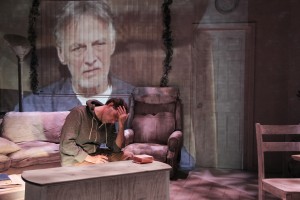 Playwright Samuel D. Hunter is enduring an impressive national swell in popularity. His “The Whale,” now being given a Chicago premiere by Victory Gardens Theater, has been making the regional rounds since its well-received debut at Playwrights Horizons Off Broadway. And, onstage at the Storefront Theater in the Loop, a slightly older play, “A Permanent Image,” is receiving a Chicago premiere by LiveWire Chicago. Beautiful in scattered moments, Hunter’s play explores the parent-child relationship by amplifying eccentricities and unlikely plot devices and character motivations—the choice method employed by most new family dramas.

LiveWire’s production, their second collaboration with the playwright after “A Bright New Boise” in 2012, is superior to Hunter’s play in that the performances, direction and design satisfy immensely, but the plot quivers uncontrollably after intermission. The setup is familiar: when an aging father passes on, the children return home only to discover that he died by less-than-natural means. Arriving to a stark white home—I mean it. The coffee table, the walls, the hanging portraits, the magazines: all clumsily painted white—the middle-aged children are shocked to find what was once their home now feverishly whitewashed. Their mother Carol’s (Janice O’Neill) admission to painting the house is one of the more joyful moments of the play, as we the audience have been conditioned to assume such visual touches are, you know, expressionistic representations of purity of consciousness, or something. Nope. Mom just got frisky with a paint roller in a state of psychological angst.

The resolution, though enticing in its juxtaposition of gloom and familial togetherness, is rather predictable and polished. I’m being purposefully vague here, as the true nature of dad’s death and the pre-intermission plot turnaround are the only major events of the play. There are hand-to-hand sibling fights between Bo (Ed Dzialo) and Ally (Mary Williamson), and Ally later finds out some distressing news concerning her absent wife and daughter; Dad also left some informative videos behind. Otherwise, it’s a story about relationships, naturally exposed by Dzialo and Williamson.

While I easily recognized O’Neill’s maternal nagging, I was never able to sympathize with her personal struggle. Of course, Hunter has supplied the actress with an amply challenging story to make any sense of. Directed with a keen eye for daily living by Joshua Aaron Weinstein, and featuring Liviu Pasare’s perplexingly cool (though equally as sad) near-holographic-looking projection on a chair, “A Permanent Image” is likely the clearest expatiation of LiveWire’s mission since last season’s “Oohrah!” But Hunter’s immobile second act stunts the otherwise fine production’s potential. (Johnny Oleksinski)