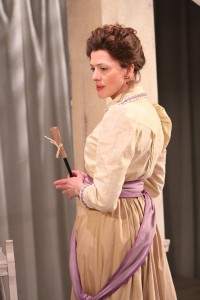 Strindberg and romantic comedy might sound like a strange combination, but in the case of “Creditors” at Remy Bumppo it’s incredibly satisfying. Closing out their season with a new adaptation by Scottish playwright David Greig, “Creditors” is as funny as it is searing. Though faithful to the original work, Greig sought to adapt as opposed to translate in an effort to modernize the piece, and the result is just that. In most aspects the only classical quality here are the costumes. The fresh dialogue remains accessible and exciting throughout its ninety minutes.

The first scene between sculptor Adolph (Gabriel Ruiz) and Gustav (Mark L. Montgomery) requires a certain amount of patience as they discuss Adolph’s new marriage to complicated authoress Tekla. It remains unclear, yet somewhat obvious that Gustav is Tekla’s estranged first husband. Greig’s dialogue is exceedingly frank about sex, which serves to make the wordy lines all the more intriguing. Instead of drawn-out monologues, the two men banter about Tekla’s eccentricities and, while not exactly riveting, it does set up the dynamic shift once Tekla enters and Gustav exits.

The tone of the play changes immediately when Tekla (Linda Gillum) enters. Trimmed in bright purple, Tekla breaks up the subdued colors of Jeffrey Bauer’s lovely set. The romantic chemistry between boisterous Tekla and nervous Adolph is at first quirky and charming but soon delves into an intense lover’s quarrel. Gillum’s thrilling performance moves from indelibly charming to seething in the span of one sentence. She plays Tekla almost exactly how you’d expect an actress to play Martha in “Who’s Afraid of Virginia Woolf?”—exuding sex but in a somewhat unsexy way. Once accused of foolish coquetterie, she unleashes her full viciousness but without ignoring an essential vulnerability. Gillum has a talent for gracefully holding a tear in her eyes even while verbally ripping apart both Adolph and Gustav.

“Creditors” makes many timeless points on the patterns of relationships. “The power of the skirt” as it relates to gender norms of the period is also an interesting theme to consider, because like Hedda Gabler, it’s quite clear that Tekla runs the show. Perhaps one of the most forward themes examined here is the idea of polyamory. “You can’t love two people at the same time,” says Adolph, to which Tekla replies, “Yes you can,” as she’s torn between her two husbands.

The play concludes abruptly but this smooth production leaves a lot to consider. It’s easy to see how Strindberg’s artistic response to the field of psychology is still relevant; the ideas of modern playwriting are born out of this key ingredient. With the combination of Sandy Shinner’s rhythmic direction and Greig’s contemporary adaptation, “Creditors” is an electrifying spin on classic European theater. (John J. Accrocco)