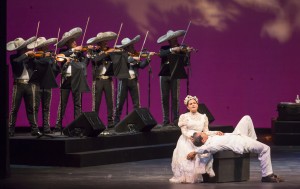 Heavily promoted as two words you don’t hear together very often, i.e., a “mariachi opera, ” “Cruzar la Cara de la Luna” [“To cross the face of the moon”] is actually a play with folk songs that happens to be accompanied by a mariachi ensemble. It is not through-composed as a true opera would be, but is more of a Mexican folk musical. It could be considered a zarzuela, the Spanish-language style of operetta with its own traditions and conventions that would actually consider mariachi somewhat lowbrow by comparison.

No matter, as whatever genre it may be, it is a remarkably compelling and compact work (seventy-five minutes and intermissionless) that opens and returns to a lone voice accompanying itself on guitar about a caterpillar becoming a butterfly, which becomes a recurring theme and folk song heard in various guises—an allegory for the immigration experience.

The narrative, both in English and Spanish (with each subtitled with the other), written by Leonard Foglia who also directs, focuses on a dying man looking back at his life in two countries, while his children and grandchildren both here and abroad (who know nothing of one another) are brought into the fabric. The music is by José “Pepe” Martínez, who was also onstage as music director, violinist and vocalist of the legendary mariachi ensemble Mariachi Vargas de Tecalitlán that presented the Chicago premiere last week, although other mariachi groups are performing the subsequent performances.

Is the narrative predictable? Yes. Is the music populist? For sure. Does this work, commissioned when current Lyric general director Anthony Freud was in the same post at the Houston Grand Opera, have anything to do with opera? No, not only in terms of genre, but even the performances are by and large pop- and folk-music voices rather than operatically trained. Is the music amplified? Yes, and that is always a huge problem for anything at Lyric Opera, as this is not a venue that can seem to do that without the end result being tinny and shrill: perhaps Lyric will have better luck as this work is taken to other venues this week. Is this work worth catching? Perhaps not for those only interested in opera, but if you have any interest not only in mariachi but in a persuasive immigration story told in heartfelt musical terms, this is a very worthwhile experience. (Dennis Polkow)