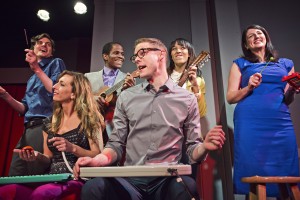 Second City’s Dalmatian-free one hundred first revue, “Let Them Eat Chaos,” hits the hyperactivity of its titular chaos squarely on the head, but, for all its unneeded projections, “Band of Brothers”-style trench scenes and deviations into the creation of the Panama Canal, the show misses the underlying joy of frenzy. Easily among the most distinctive and likable casts of the past several Mainstage revues, their efforts are appealing but ultimately only somewhat funny.

Even before the performance—directed by Matt Hovde—begins, the title is a head-scratcher. Since all Second City revues, in one way or another, enlighten the absurdity of the world’s (and preferably, at least some of the city’s) chaos, what differentiates this one? Some might say the structure, itself, is chaotic. I don’t think that was a purposeful move, but rather a result of too flimsy a through-line. This revue is also nearly void of specific topicality outside of improvised audience interactions; with impending Supreme Court gay marriage decisions, North Korean nuclear threats and rampant city school closings, there is a veritable buffet of chaos just screaming to be lampooned.

The first act, more typical of what audiences have come to expect of Second City, is packed with shorter vignettes such as a song examining society’s of-the-moment obsession with all things “cute,” and a montage observing the many things we don’t pay attention to while texting (My favorite technology bit in recent years depicted a woman wailing to Pat Benatar’s “We Belong,” frantically searching for her loved one. Thankfully, she finds her beloved cell-phone and happily skips off into the sunset. “Chaos”‘s sketch lacks that sequence’s simplicity and effectiveness). The first half ends on the revue’s strongest scene, a rap battle wherein one participant exposes the world’s gritty injustices and another more flightily fights for the “Freedom of Peach [the discontinued Pinkberry yogurt flavor]” and rails against the oppressive Condo Association.

The second act becomes wrapped up in overlong story sketches about World Wars I and II and a broken violin. I tend to admire when Second City verges, for a moment, onto dramatic ground, earning moving moments through their humor. But these don’t satisfy on an emotional level, largely because they are knowingly heavy-handed.

As I said before, this is among the best ensembles of a Mainstage Second City revue in recent memory. Katie Rich brings her usual softness punctuated by hilarious “large Marge” fisticuffs outbursts. Tawny Newsome (fresh from “The Second City Guide To The Opera” onstage at Lyric) and Holly Laurent have terrific singing voices, and their songs succeed musically as well as comedically; and the three men (Steve Waltien, Edgar Blackmon and Ross Bryant) are all different variants of the lovable nerd. (Johnny Oleksinski)