Lionel Bart’s “Oliver” is always, first and foremost, about the kids. And when it comes to singing, dancing, mischief-making rapscallions, director Rachel Rockwell’s Drury Lane Theatre production delivers gloriously; It’s the adults and their environment here that muffle Dickens’ “Twist.”

In just about every choice, you can observe Rockwell fighting, quite understandably, against the merry-go-round buoyancy of Bart’s popular score. For a story of thieving orphans swimming in the grime of Victorian London, “Oliver!” has always been conspicuously upbeat; strangely more so than “Mary Poppins,” a musical about well-to-do, parented children with the comparably light burden of a strict babysitter.

In style, “Oliver” is more of a precursor to “Newsies” than it is to “Mary Poppins” or, say, “Billy Elliot.” Like Alan Menken’s “Newsies” score, each of Bart’s songs excitedly exclaims one thing or another, be it the title character’s name (“Oh-Lee-Vuh!”), “Food, Glorious Food!,” or “Consider Yourself [at Home],” with a front-page headline’s attention grab. So, when every culturally ingrained ditty is, itself, a showstopper, it’s a struggle to craft a cohesive, emotionally satisfying story. Same goes for the stagnant “Newsies.” In truth, I’ve always found the music of “Oliver!”, beloved though it may be, a better fit for an album than a theater.

Rockwell is smart to champion the darker crevices of the plot over kneeling to the chipper march of the score—even Nancy’s (Heidi Kettenring) famous “As Long As He Needs Me” (Oh, British musicals and their colorless ballads) is more musically uplifting than grim—but what results is neither fun nor dreary, but light. As Oliver moves through the workhouse to Fagin’s dwelling, to his deceased mum’s dad’s home, across bridges and down streets, no location is articulated any differently from the previous one. Sure, a set piece slides on and a background projection changes, but Kevin Depinet’s set design does little to shift the actual mood.

Dickens’ journeys are sprawling tours of class and commerce, but the evenness in Rockwell’s staging renders Oliver’s ups and downs quaint and ordinary. The feet of Dickens’ novel are also so firmly planted in Victorian England, and this production with its oppressive bright blue and red lighting by Greg Hofmann, couldn’t be further away. Toppling the theater’s Sunday brunch facade is, of course, a challenge, and the aesthetic all feels a touch “on ice!” Despite Rockwell’s best efforts, we never depart Drury Lane for, well, Drury Lane. 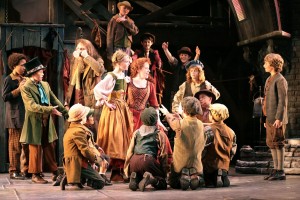 Kettenring’s Nancy is sung with great strength, and she brings a barmaid’s likable sass to the table; You half expect her to call you “hun.” But her relationship with the abusive Bill Sikes (John Gawlik) is an idle pot of water waiting for the gas burner to be turned on. And its tragic culmination, in an altogether cluttered final sequence, is unsatisfying because no connection is ever forged. The real black sheep among the adult performers though is John Reeger as Fagin. Reeger plays the conniving role, arguably the most comically fertile in the show, in a manner so loafing and depressed that you never catch a glimpse of his charisma, appeal or snakiness. You wonder how he ever ensnared any of these children in the first place.

A resounding success here is Brady Tutton’s Oliver, as good a performance of the role as you’ll see anywhere, sweetly sung and irresistibly honest, even if the young actor doesn’t know it yet. “Where Is Love?” is lent a cowering simplicity and quiet hopefulness by Tutton, and the early song is easily this production’s highlight. His performance, its technique and ease (same goes for Bet, played by Sophie Thatcher, a sixth-grader with a voice so forceful it left me giddily flummoxed) got me to thinking about “Smash,” “Glee” and YouTube. Young people are finding theater sooner than ever before; its stigmas are fading away and talents and passions are being nurtured as early as the single digits. This development is cause for celebration, and Rockwell has a gift for showcasing the tremendous trend. As sleepy and meandering a production as this is, the kids sure do shine. (Johnny Oleksinski)